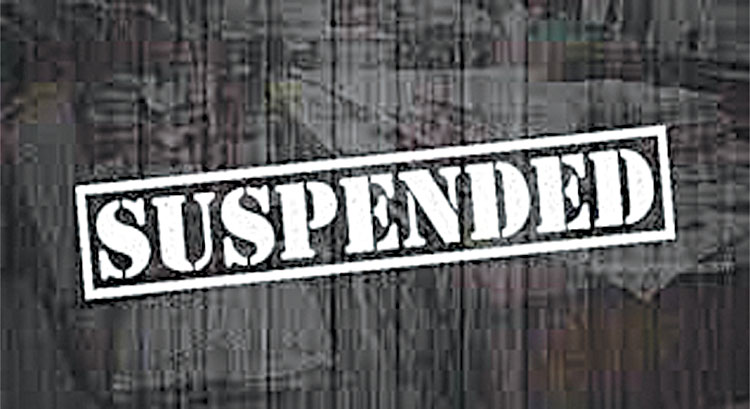 The other three are Assistant sub inspector Guravaiah station writer, Constable Abdul Durrani assistant writer and Constable Varaprasad assistant writer of Anaparty police station. The charge against CI Gita Ramakrishna was that he removed the four new tyres of division crime spot vehicle Suzuki Ertiga and fixed to his own Maruti Ertiga car during April last while he was the Yetapaka CI and misused his official position and violated the official code of conduct. When this irregularity came to the notice of the SP an enquiry was ordered and basing on the enquiry report submitted by the Chintur SDPO and on the recommendation of the SP the DIG has issued the suspension orders. Similar is the case of SI , ASI, two constables of Anaparty police station .During 2019 general elections, the licensed weapons of 22 private individuals were deposited in the Anaparty police station of which a double barrel -12 bore gun was missing. All these four were charged with dereliction of duties holding them responsible for the missing of the weapon from the safe custody.

The SDPO enquired the matter and submitted a report basing which the SP has recommended for disciplinary action and the DIG had issued the suspension orders ‘ the SP added. Further the SP Ravindranath babu has made it clear that soon after he took charge last week, he sent clear cut message to all the police personnel that police had to function in accordance with the aims of the government free from corruption and nepotism infusing confidence among the people and dereliction of duties and complacency would not be tolerated. He said no lenience would be shown against the erring and stringent punishment would be awarded. He hoped that police being a disciplined force would bring good name in the coming days in effective maintenance of law and order especially in dealing with Disha cases .