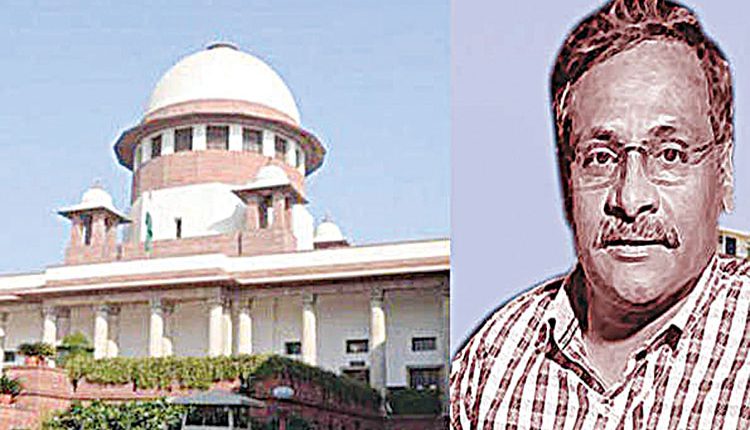 New Delhi, Oct 15 (Bureau) In a major setback to former Delhi University Professor, GN Saibaba and five others, the Supreme Court on Saturday suspended the order of the Bombay High Court which acquitted him under UAPA for alleged Maoist link. The Supreme Court also refused the plea of Saibaba that he should be allowed to come out of jail and be put under house arrest and other restrictions as the court put on him. It asked Saibaba to file application for bail.A Special bench of the Supreme Court headed by Justice M R Shah and also comprising Justice Bela M Trivedi, passed the order, after hearing the submissions and arguments made by the Solicitor General (SG) Tushar Mehta for the Maharashtra Government and senior lawyer R Basant for Saibaba.The Supreme Court, however, said it will hear the case in details, later on, keeping in view the sensitivity of the case.Basant pleaded to the Supreme Court that Saibaba is 55-year-old and is wheelchair bound with 90 percent disability and was not involved in activity of waging war against the country as alleged by the Maharashtra government.

Basant said the SG alleged that he (Saibaba) was the brain behind it, but there is nothing to show his involvement. To this, Justice Shah observed, “So far as terrorists or Maoists activities are concerned, the connection is more dangerous. Direct involvement is not necessary.”Justice Shah, said, this on the context of not of his involvement by Basant, and said, I said this not with respect to this specific case. Further elaborating on the case, Basant said he was arrested in 2015, for over 7 years he has been under custody, except for a brief period of two times, where he was given bail on medical grounds. “Generally in terrorists and Maoists activities, indirect involvement is more important than physical strength. Direct involvement may not be required,” Justice Shah, leading the bench, said and dismissed the relief of acquittal granted by the Nagpur bench of the Bombay High Court to Saibaba and others.

The SG Mehta, vehemently opposed the plea of Saibaba to put him under house arrest and not in jail and told the Supreme Court that now-a-days, such requests are being frequently made by “urban naxals” and the court should not allow such kind of pleas. The Supreme Court asked Saibaba, to file appropriate application for bail. It also asked him to file his response on the appeal filed by the Maharashtra government seeking to cancel the Nagpur bench of the Bombay High Court, and fixed the matter for further hearing after December 8, 2022. “The facts are very very disturbing , supporting call for arms in Jammu and Kashmir, supporting overthrowing Parliament, arranging meetings with Naxalites, attacking our security forces etc,” Mehta told the Supreme Court and seeking a direction to stay yesterday’s Nagpur bench of the Bombay High Court’s order. “There is no criminal antecedents whatsoever for him (Saibaba). He is leading a respectable life, may be ideologically inclined.

There is nothing to show his involvement in any kind of illegal and or terror activities,” Basant told the Supreme Court.Basant, for Saibaba, further pleaded to the Supreme Court that he is a person aged 55 years. He is married person with family, 23 year old unmarried daughter. He is having 90 per cent disability and Paraplegic. He is having multiple other ailments which are judicially accepted and confined to my wheel chair.SG Mehta said there are 6 accused. As far as accused number 6 (Saibaba) is concerned, he did not raise the ground of sanction at trial and was raised at the appellate stage. “The purpose of sanction is to ensure at threshold that a person is not put to vexatious trial. This is not a vexatious trial. If after a full fledged trial persons are found guilty, there is no vexatious trial,” Mehta said.