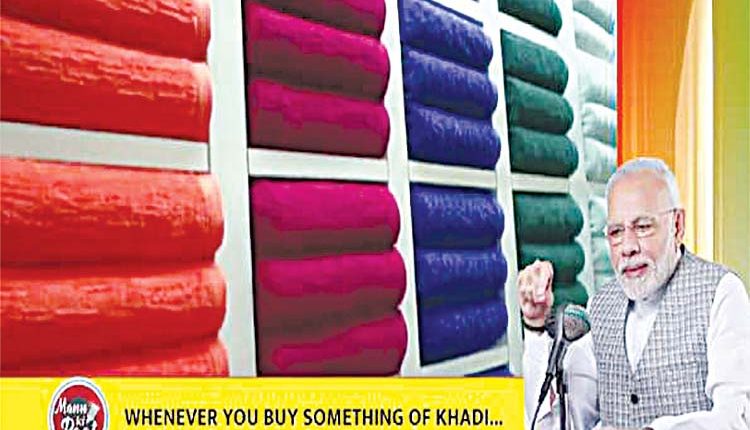 New Delhi, Jul 25 (FN Agency) Prime Minister Narendra Modi on Sunday asked fellow citizens to buy Khadi products as it benefits the poor weavers in the country. ‘Whenever, wherever you purchase a Khadi product, it does benefit our poor weaver brothers and sisters. That is why, in a way, buying Khadi is service to people, service to the country,’ Mr Modi said while addressing the 79th edition of his monthly radio broadcast – ‘Mann Ki Baat’. Mr Modi said the National Handloom Day is on August 7 and the people can celebrate the day by purchasing Khadi products.”National Handloom Day has a remarkable historic background.

On this very day in 1905, the Swadeshi Andolan had begun,’ the Prime Minister said. He said in the rural and tribal regions of the country, handloom is a major source of income. ‘This is a sector that comprises lakhs of women, weavers and craftsmen. Even small efforts on your part will give rise to new hope in weavers. Do purchase something or the other and share your thought with others as well…now that we are celebrating 75 years of Independence, it of course becomes our responsibility,” the Prime Minister said. “You must have noticed that year 2014 onwards, we often touch upon Khadi in Mann ki Baat. It is only on account of your efforts that today, the sale of Khadi has risen manifold.’ ‘Could anyone even think that in any Khadi store, the sales figure would cross one crore rupees… But you have made that possible too,’ Mr Modi added.