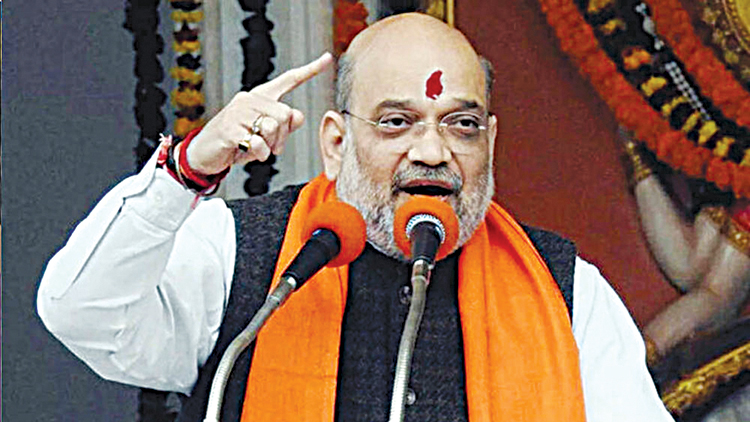 New Delhi, Aug 4 (Bureau) Listing out the central government’s achievements in last 8 years comparing to the policy paralysis and scam-hit UPA government’s, Union Cooperation Minister Amit Shah on Thursday said the policies of Prime Minister Narendra Modi are showing results that are reflected in India’s several achievements including 7.4 percent GDP recorded this year, which is much higher than many developed countries including US and Germany. “Under the leadership of Narendra Modi, the nation’s GDP growth in 2022 is 7.4 percent, which is much higher than many developed countries. This shows that our policies have been successful and are showing results,” he said addressing the Sankalp Se Siddhi Tak programme organised by CII. Shah said when Modi took over as the PM in 2014, there was policy paralysis and scams of Rs 12 lakh crore were making headlines. “Crony capitalism was at its peak, the fiscal deficit was out of control, the ease-of-doing business was going downhill and our prestige in the world was waning.

In such a situation, the people, making a historic decision, elected Shri Modi as the Prime Minister and after 30 years, a decisive government with an absolute majority came to power,” he said. Looking at the journey of the last 8 years, India today has become the fastest growing economy as a record Rs 1.68 lakh crore GST revenue has been generated in April this year through the successful implementation of GST. “Most merchandise exports happened in 2022, the highest FDI came in, in 2022 and we have also made a quantum leap in the ease-of-doing rankings,” he said. Shah said in the last eight years, Modi has made efforts to revive and strengthen the economy. “The government has given direction to the country’s economy with the two slogans of self-reliant India and Make in India. The Modi government has laid the foundation for the next 25 years of Amrit Kaal and today no one can take India lightly,” he said. Between 2014 and 2021, Shah said FDI worth US $440 billion came into India and India has become the world’s 7th favorite destination for investment. “We were at number 142 in the ease-of-doing business rankings in 2014, today we are at number 63. From a unicorn startup in 2014 to today with over 100 unicorn startups, the youth of India are representing the country on the global stage.

We were 71st in the Global Competitiveness Index in 2014-15, today we are at 43rd position,” he said. Shah said by focusing on infrastructure, India has laid the foundation of a great India and created assets for the next generation. For social and economic infrastructure, the centre decided to spend Rs 100 lakh crore, build 11 industrial corridors and create 32 economic investment zones, Shah said. “Earlier a transmission line was 3 lakh circle km, which has been increased to 4,25,000 circle km by the Narendra Modi government in 8 years. Earlier only 60 panchayats had optical fiber but in the last 8 years it has reached 1,50,000 panchayats and by December 2025, not a single village in the country will be without optical fiber. The National Highway was about 91,000 kms, it has been increased to 1,34,000kms and renewable energy capacity has crossed almost 100 GW,” he said. Shah said the Modi government eradicated the country’s asymmetrical growth by freeing the 60 crore people, who did not have the ability to buy, from everyday worries of fulfilling their basic needs. “A large population is a market and a market is created when the country’s growth is symmetrical to it. India’s population was 130 crore and the market was 800 crore people, because the rest of the people did not have the ability to buy. An individual’s priority was to take care of his family.

“We gave the people gas cylinders, toilets, drinking water, Rs 6,000 were given to about 11 crore farmers through PM Kisan, houses were constructed for more than 2.5 crore people, health insurance of Rs 5 lakh was made available to about 60 crore people, 43 crore bank accounts were opened through DBT, the Modi government has transferred Rs 23 lakh crore directly into the bank accounts of the poor in 8 years without any corruption,” he said. “This means that the government has freed these 60 crore people from everyday worries. Generations of crores people used to be consumed by everyday worries, but the government led by Shri Narendra Modi has given them all this in the last 8 years. Now freed from worries, a person can think of the future,” he said. “Now people think about fulfilling their ambitions and are able to associate themselves with National development,” he added. Shah said Modi has worked to make an economy and a market 130 crore by connecting the aspirations of these crores of people with the development of the economy. “When 130 crore people together contribute to the economy, then our power becomes huge. Shri Narendra Modi has given a human face to the economy and the GDP. Shri Shah said that for the last 8 years, pure drinking water to every household has been provided and people have been freed from worries about the health of their family,” he said.