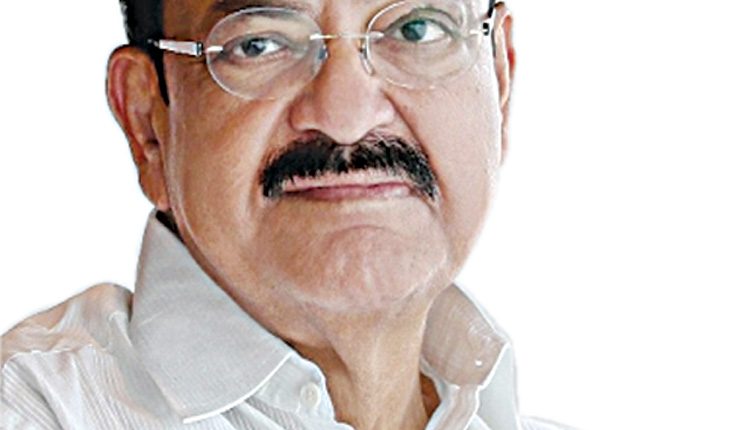 New Delhi, Feb 25 (FN Bureau) The Vice President, Shri M. Venkaiah Naidu today called upon the people to follow the path shown by Sri Parameswaranji and strive to build a stronger, happier and prosperous India. Delivering the first P. Parameswaran Memorial Lecture oganised by BharatheeyaVicharKendram in Thiruvananthapuram today, the VP emphasized the need for an India that is free from social evils like casteism and corruption and takes pride in its rich cultural and spiritual heritage. Paying rich tribute to Sri Parameswaranji, Shri Naidu called him a Tapasvi and humanist par excellence and said that his life inspires us to keep the nation above everything.

Noting that he was instrumental in reviving the forgotten tradition of observing Ramayana Month in Kerala, the Vice President said that through his writings, speeches and other intellectual activities, Sri Parameswaranji changed the tone and tenor of intellectual discourse in Kerala. He was a great writer, orator, a poet and social philosopher, Shri Naidu said. Counting Sri Parameswaranji among the great intellectual figures from Kerala who brought about cultural awakening and spiritual rejuvenation, the Vice President mentioned the contribution of great thinkers and spiritual leaders such as Jagadguru Adi Shankaracharya, Acharyas Ramanuja and Madhva, Swami Ranganathananda of Sri Ramakrishna Matt and Mata AmritanandaMayi.

Lauding the 8th century philosopher, Jagadguru Adi Shankaracharya, Shri Naidu said that he not only integrated diverse thoughts and practices through his philosophy of Advaita Vedanta but also recovered the Gita which was lying dormant in our intellectual tradition. In modern times in Kerala, the Vice President said, Advaita was made an inspiration both in intellectual and social reformation strata by Sri Narayana Guru. “But for Sri Narayana Guru, Kerala would have drowned in the darkness of social and intellectual decline”, he said. The Vice President further opined that – it is because of the strong background of this intellectual tradition, India remains as an eternal nation or civilizational entity, in spite of the vicissitudes it had to face throughout ages.

Observing that India’s intellectual tradition in cultural and civilizational contexts has survived over five thousand years, he said this intellectual tradition was interwoven with India’s social texture and helped to sustain India’s fundamental unity despite its diversities. Referring to the great Sanskrit epics or Itihaas- the Mahabharata and Ramayana as the fountainhead of Hindu thought and philosophy, Shri Naidu underlined that the religious and cultural life of India and much of Asia has been deeply influenced by these two epics. Highlighting that our Vedic Rishis envisaged an orderly collective human life which ensures the welfare of all (SarvabhootaHitam), the Vice President said that we owe a lot to our Vedic Rishis for our culture and knowledge tradition. “They applied their knowledge and spiritual experience for the benefit of the society and put forward the concept of Dharma – a rule of behavior based on values which have a spiritual content”, he said.

Noting that Sri Parameswaranji popularized Gita as a comprehensive life science which can provide a solution to the social problems, Shri Naidu said that he wanted to combine Sanskrit, Yoga and Gita Studies for which he coined a new term ‘Samyogi’. Calling Sri Parameswaranji as a great institution builder, he mentioned his staller contribution as the Director of DeenDayal Research Institute, founder of BharatheeyaVicharaKendram and President of Vivekananda Kendra. Shri Naidu also listed numerous publications by Parameswaranji and the awards and hounors he received in recognition of his service to nation including Padma Sri in 2004 and Padma Vibhushan in 2018. “Parameswaranji initiated so many young people to the field of writing and research”, he added.

The Vice President said that he personally admired Sri Parameswaranji because of his simplicity, intellect and the way he served the people. Reminding the youth of India’s rich culture and glorious history, he wanted them to go back to the roots and follow the spiritual & moral path shown by our ancestors. He asked the younger generation to draw inspiration from our ancient values of ‘VasudhaivaKutumbakam’ and ‘share & care’ and make India ‘Vishwa Guru’ again.