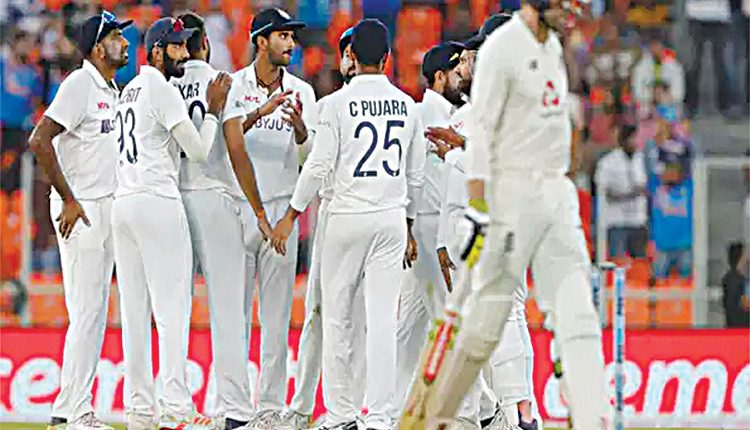 Ahmedabad, Feb 25 (FN Agency) Out of 30 wickets that fell through the course of two days in Ahmedabad, 28 went to spinners, as the D/N Test between India and England in under six full sessions, with the hosts chasing down the target of 49 without any loss. The clatter of wickets on Day 2 exemplified the tough conditions on display for the batsmen. One batsman after another had to negotiate conditions where a few exploded off the surface, which in turn sowed the seeds of doubt. Eventually, most of the batsmen were done in by the straighter-one. After Joe Root and Jack Leach had stunned the Indian batting line-up by snuffing out the side for just 145, Ravi Ashwin and Axar Patel made lightwork of England, dismissing them cheaply in just one session.

The demolition job in the second innings started off the first ball itself when Zak Crawley played back to the arm-ball and was cleaned up by Axar. Jonny Bairstow, who got an LBW decision reversed, fell in the same over. Dom Sibley too didn’t last long with Axar bagging his third scalp. The only time that England seemed to be in the game was when Ben Stokes unfurled a flurry of sweeps including the reverse sweeps to keep the scorecard ticking over. Just when Stokes threatened to power England to a lead of some substance, Ashwin snuffed out the batsman LBW. England’s woes didn’t end there as Axar sent Root back to the pavilion, with the England skipper also being adjudged LBW. The lower order didn’t stand much of a chance against the Indian spin pair, with the tourists hurtling to 81 all out inside 31 overs. During the course of the innings, Ashwin became the second quickest to reach the landmark of 400 Test wickets. On the other hand, Axar finished with a rich haul of 11 wickets for the match. Rohit Sharma and Shubman Gill then provided the finishing touches to India’s clinical effort.

Earlier, Root and Leach had led England’s fightback by sharing nine scalps between them to give the visitors a chance of winning the Test. Root ended up with impressive figures of 5 for 8 from 6.2 overs. For the home side, Rohit made a telling difference in the first innings, compiling an aggressive innings of 66. A confident Indian side will look to wrap the series when the two sides meet again in Ahmadabad on March 4. Meanwhile, England have a lot of soul-searching to do, as they have been shot out for less than 200 in their last five innings.