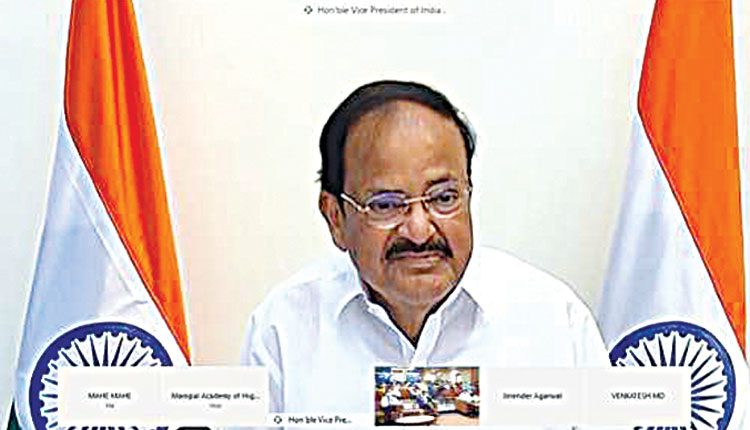 Hyderabad, Dec 18 (FN Bureau) Expressing concern over the future of media and Journalism and the sanctity of news in the face of disruptive technological advances, Vice President M.Venkaiah Naidu has urged all the stakeholders to ensure credible journalism since media is an effective tool of empowerment of people for informed public discourse. Mr Naidu spoke at length on “Journalism: Past, Present and Future’’ while delivering the M.V.Kamat Memorial Endowment Lecture in virtual mode from New Delhi on Friday.

He listed the concerns about media and journalism as issues relating to Freedom of press, censorship, flouting of norms of reporting, social responsibility of journalists, decline in the values and ethics of journalism, yellow journalism, journalism of false crusades, reporting for profit, disinformation in the form of fake and paid news, disruptions caused by the Internet and the future of media amidst these concerns and challenges. Mr Naidu said “Yellow journalism seeks to cloud the facts by resorting to eye-catching headlines and promotes distortion and misinformation. The Vice President voiced concern over the implications of the growing ‘instant journalism’ triggered by the emergence of Internet and social media expansion in the form of propagation of fake news and erosion of journalistic norms and ethos. He further noted that technology giants have emerged as algorithmic gatekeepers of information and the web emerging as the main distributor of news. Mr Naidu, in particular, referred to the financial implications for the traditional media like the newspapers with their journalistic products being leveraged by technology giants and not sharing the revenues with the concerned.

Mr Naidu noted that the Internet has disrupted the revenue and reporting models with serious implications. He stated that “The information and reports generated by the print media at substantial cost is being hijacked by the social media giants. This is unfair. Some countries are taking measures to ensure revenue sharing by the social media giants with the print media. We too need to take a serious look at this problem and come out with appropriate revenue sharing models for the survival of traditional media,” he said.