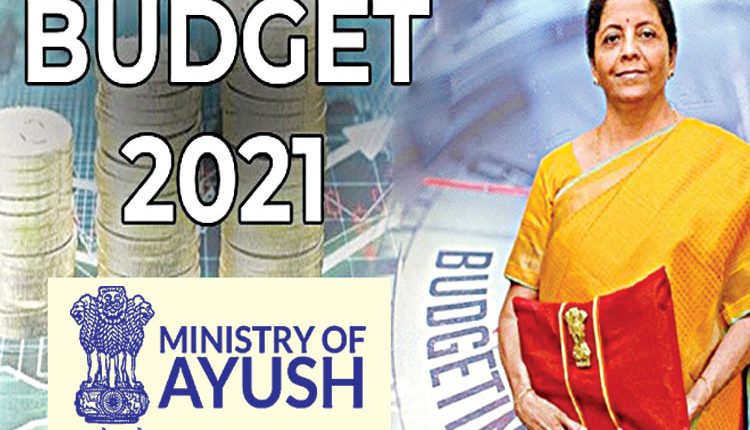 New Delhi, Feb 7 (FN Bureau) The Union Budget 2021-22 has brought out numerous enablers and catalysts which the AYUSH Sector can tap, and taken together, they place the Sector on a sustainable path of growth, according to a panel of experts who interpreted the Budget for the AYUSH Sector recently. Budget 2021-22 presented by the Union Finance Minister Nirmala Sitharaman on Monday allocated Rs. 2,970.30 crore to Ministry of AYUSH for the next fiscal year marking an increase of 40% of the corresponding figure (Rs.2122.08 Cr) of the current fiscal. Further, when the revised allocation of Rs. 2322.08 of the current fiscal is considered, the allocation marks an increase of 28%. To understand the impact of the current union budget on the AYUSH Sector and explain the same to the stake-holders, the Ministry of AYUSH organised a Panel Discussion on the topic “Implications of Union Budget 2020-21 for the AYUSH Sector” on 4th February 2021 in the digital mode. Representatives from the Industry, service sector, media, government and AYUSH practice joined the discussion, which was streamed through various digital platforms on 6th February 2021.

Shri Ranjit Puranik MD & CEO, Shree Dhootapapeshwar Ltd. and a representative of the AYUSH industry, was of the view that the Budget is part of a policy continuum which incorporates many of the views espoused in the recent past by the AYUSH industry, AYUSH Ministry and other stake-holders of the Sector. He cited various pointers from the Budget and said that scientific studies in AYUSH would increase and give impetus to AYUSH as a medical stream. He recollected that Rs. 4000 crore was recently earmarked for the National Medicinal Plants Board (NMPB) for backward integration projects dealing with medicine plants. He added that about 8800 units are part of the AYUSH industry in India, and they are poised to capitalise on the various booster provisions that this Budget offers to the industry.

There is a health system perspective underlying these increasing allocations. He indicated that the impetus that the AYUSH Sector can draw from this Budget goes beyond the compartmentalised allocations to the sub-sectors. Even a goal-defined project like the National Research Foundation, with its Rs. 10,000 cr outlay for 5 years, is a potential catalyst for the Ayurveda Sector, since a small proportion of this allocation is sufficient to produce world class evidence in a few areas of Ayurveda. Presenting some statistics, Shri Vasudevan said that the increasing funding in the AYUSH Ministry on International Cooperation is a sign of how AYUSH Healthcare systems are contributing to India’s growing soft power. Spending on AYUSH delivery systems has increased from Rs 122 Crore in previous year to Rs 299 Crore this year, in turn leading to enhanced outcomes at ground level. Dr. Geetha Krishnan, an Ayurveda expert presently working as Technical Officer in the Traditional Medicines Unit of the WHO described what this Budget represents for the AYUSH Sector as “growth and continuity”. Tracing the decadal trend in the 300% growth of outlay for AYUSH, he explained how the current Budget integrates the Sector into the country’s overall growth pattern. The influence of National Health Policy, 2017 has been visible in the government-led growth in healthcare infrastructure in the past 3 years, and has helped the AYUSH systems to grow faster and receive increased funding support. He mentioned that the building blocks of growth are coming into place and emphasised that it is important for AYUSH to become part of every healthcare system.