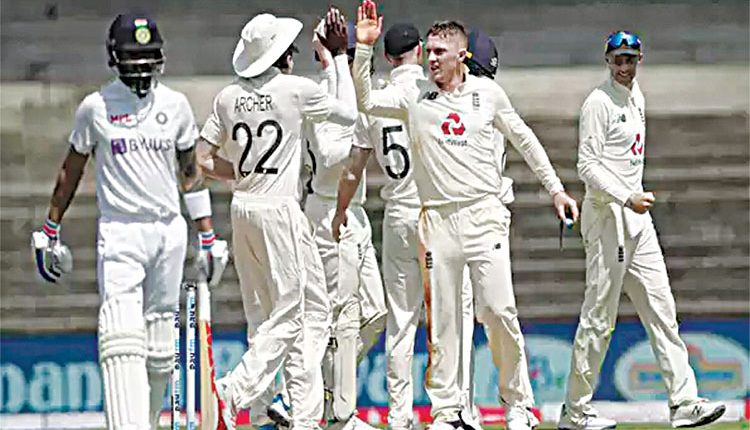 Chennai, Feb 7 (FN Bureau) Dom Bess starred for England with the ball as the visitors took control of the opening Test in Chennai. Bess picked up four wickets after England posted a massive 578 on the board that has now left India needing another 122 runs to avoid the follow-on. Washington Sundar and R Ashwin stemmed the rot towards the end but with momentum on their side, England will fancy their chances of picking up a rare win on Indian soil. Earlier in the day, overnight batsmen Bess and Jack Leach continued to frustrate India which forced the hosts to take the new ball. While Jasprit Bumrah made the first breakthrough getting rid of Bess, R Ashwin cleaned up James Anderson, thus ending India’s frustrating stay out in the field that lasted 190.1 overs. England looked to capitalise on that by making early breakthroughs and Jofra Archer, playing his first Test match in this part of the world, made an immediate impact.

Archer got one to slightly move away off a good length to take Rohit Sharma’s edge to put India on the backfoot very early. Shubman Gill played some delightful shots to begin with but his approach cost him his wicket eventually as he hit one straight to mid on where a diving Anderson took a good low catch. Post lunch, India adopted a conservative approach in their attempt to rebuild but after 10 overs, Bess ran the show, though. He first dismissed the Indian skipper Virat Kohli with a delivery that came into the batsman to take the inside edge to the short leg and soon after got Ajinkya Rahane as well, who hit a low full toss to cover where Joe Root took a stunning catch to his left. Literally gifting their wickets, India were in deep trouble at 73/4, still more than 500 behind. Rishabh Pant and Cheteshwar Pujara, the heroes in Australia, then joined forces again to give the hosts some hope. While Pant came out all guns blazing like he usually does, even Pujara looked very active in the crease using his feet to good effect against the spinners. Pant took a liking to Leach in particular smashing him for sixes on multiple occasions without any fear despite England stationing fielders at the boundary.

By Tea, both batsmen had hit half-centuries and looked assured at the crease. Their approach hardly changed as boundaries started flowing in regular intervals in the final session as well. The century stand was finally ended when Pujara, in an extremely unlucky fashion, pulled a short delivery from Bess that hit the short leg fielder and ballooned up in the air for the man at midwicket to pouch. Pant then didn’t last long after the dismissal as he perished in a manner that was not alien to him. Batting on 91, the dynamic wicketkeeper-batsman looked to take on Bess but the turn ensured he didn’t time it cleanly. The fielder at deep cover completed the catch as Pant missed out on another century leaving India in further trouble. Local boys Washington and Ashwin then showed plenty of courage batting out 17.2 overs to close out the day’s play but India’s task only gets harder from here on going into the final two days.