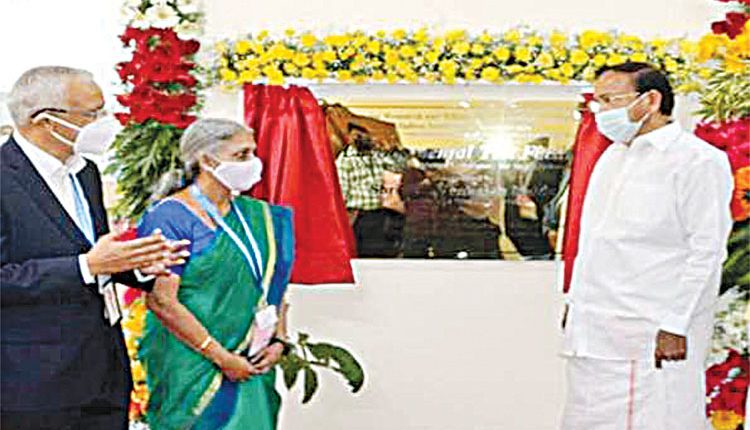 New Delhi, Dec 29 (Agency) Stressing the need to inculcate scientific temper in the younger generation, Vice President M Venkaiah Naidu on Tuesday said the ultimate aim of science is to make people’s lives comfortable and happier and urged scientific institutions to provide a platform for innovations and technological advancements. Addressing the students and the faculty at the Centre for Research and Education in Science and Technology (CREST) of the Indian Institute of Astrophysics at Bengaluru, he said that science is the foundation for the progress of any society as it deals with truths of verifiable facts through repeated experiments. He also called for providing equal opportunities and encouragement to women scientists.

The Vice President also inaugurated the two new facilities–a large segment polishing facility for mirrors for the Thirty Meter Telescope and an Environmental Test Facility of small payloads, as part of the M.G.K. Menon Laboratory for Space Sciences. He also witnessed the integration of the space payload inside the M.G.K. Menon Laboratory for Space Sciences and the remote operation of the 2m Himalayan Chandra Telescope. Underlining the importance of studying basic science, he said India has a rich heritage from the ancient times, in astronomy and mathematics. The facilities inaugurated today will help India in the Atmanirbhar Bharat Mission, initiated by the Prime Minister Narendra Modi. The Environmental Test Facility will help the space sector in the coming years, he added.

After inaugurating the facility Mr Naidu congratulated the scientists and engineers for their efforts in meeting the national and international goals by setting-up this world-class optics facility. He also complimented the Department of Science and Technology (DST) and Department of Atomic Energy (DAE) for their vision to support scientific projects of this scale. Observing that India’s long tradition of Astronomy is well known to the world, he noted that India has made several notable contributions to the world of astronomy from ancient times to the modern era. The Vice President said that participation in such mega scientific projects would provide a level playing field to Indian scientists and help the industries to build capacity in high technology field. He said India was moving up in the technology front very rapidly. The much-talked about ISRO space mission “Mangalyan” and India’s astronomy observatory “ASTROSAT (astronomy satellite) for surveying the sky in X-ray and UV, and the soon to be launched Aditya L1, a solar study mission, are a few examples.