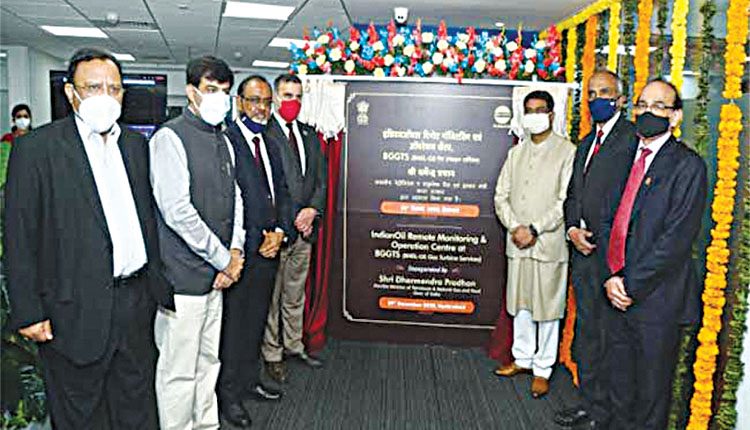 Speaking on the occasion, Mr Pradhan said that this is an important day for the nation as the vision of Prime Minister for Atmanirbhar Bharat and Digital India has been combined in the development of a great technology to ensure preventive as well as proactive monitoring and maintenance of refinery gas turbines remotely from Hyderabad. He also said that this is an indigenous technology developed by Indian technocrats and Indian Oil, the premium oil company in the country is finishing the year 2020 with this big digital intervention. “This is the first time ever, such a multi-unit monitoring system in the country is being implemented by an Oil PSU in the country. Originally, this remote monitoring system was envisaged to be operated out of GE’s Atlanta Analytical Centre in the United Sates. But owing to Data Residency Clause and National Cyber Security Guidelines, the Centre would now be operated out of Hyderabad.

To implement this project well on schedule, a core group of Indian Oil experts worked closely with BHEL-GE Gas Turbine Private Ltd. The project also conforms to “digital innovations across all energy systems”, one of the key drivers of the seven pillars delineated by him, for guiding the energy strategy of the country. Indian Oil has been taking several digital initiatives to enhance energy efficiency, reliability and performance while ensuring contribution to environmental sustainability”, said Mr S M Vaidya, Chairman, Indian Oil. This technology of Proactive Predictive Analytics based Automated Anomaly Detection has been jointly developed by experts from General Electric, BHEL and Indian Oil. By deploying this technology, the Gas Turbine Operational Data flowing in digitally from 27 gas turbines of the eight Indian Oil refineries across the country would be analysed round the clock here at the Remote Monitoring Center, Hyderabad. Earlier, Mr Pradhan also reviewed the industry performance by oil marketing companies in Telangana, which was attended by officials from all Oil PSUs in the State.