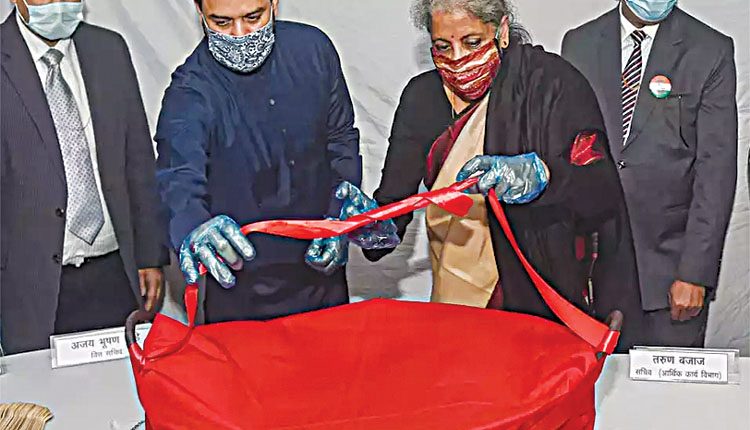 New Delhi, Jan 24 (Agency) Finance Minister Nirmala Sitharaman, Minister of State for Finance Anurag Thakur and senior officials of the finance ministry on Saturday participated in the symbolic ‘Halwa Ceremony’ that marks the beginning of compilation of budget documents. Unlike the past, the voluminous budget documents will not be printed this year following the COVID-19 protocol and will instead be distributed electronically to the Members of Parliament (MPs). Previously, the ceremony marked the launch of printing exercise for the budget. This will be the first time since the presentation of independent India’s first budget on 26 November, 1947, that the documents containing income and expenditure statement of the Union government along with the finance bill, detailing new taxes and other measures for the new financial year, will not be physically printed.

“In an unprecedented initiative, Union Budget 2021-22 will be delivered in paperless form for the first time. The Union Budget 2021-22 is to be presented on 1 February, 2021,” the Finance Ministry said in a statement. On the occasion, the Finance Minister also launched the ‘Union Budget Mobile App’ for hassle-free access of Budget documents by Members of Parliament (MPs) and the general public using the simplest form of digital convenience. The mobile application facilitates complete access to 14 Union Budget documents, including the Annual Financial Statement (commonly known as Budget), Demand for Grants (DG), Finance Bill etc. as prescribed by the Constitution, it said. Finance Secretary Ajay Bhushan Pandey, Economic Affairs Secretary Tarun Bajaj, Financial Services Secretary Debasish Panda, DIPAM Secretary Tuhin Kanta Pandey, Expenditure Secretary T V Somanathan and Chief Economic Adviser K V Subramanian and other senior involved in the Budget preparation and compilation process, were also present in the customary pre-Budget event. “Later, the finance minister reviewed the status of the compilation of the Union Budget 2021-22 and extended her best wishes to the officials concerned,” it said.

The statement further said that the App has a user-friendly interface with embedded features of downloading, printing, search, zoom in and out, bidirectional scrolling, table of contents and external links, etc. The App can also be downloaded from the Union Budget Web Portal (www.indiabudget.gov.in), it said, adding, the App has been developed by the National Informatics Centre (NIC) under the guidance of the Department of Economic Affairs (DEA). The Budget documents will be available on the Mobile App after the completion of the Budget Speech by the Finance Minister in Parliament on 1 February. As part of the ritual, ”halwa” is prepared in a big ”kadhai” (large frying pot) and served to the entire staff involved in the Budget making the exercise of the ministry. Halwa was served while maintaining COVID protocol with all present in mask and those distributing sweets were wearing gloves. The significance of the event is that after the sweet dish is served, a large number of officials and support staff, who are directly associated with the Budget making are required to stay in the ministry and remain cut off from their families till the presentation of the Budget in the Lok Sabha. They are not even allowed to contact their near and dear ones through phone or any other form of communication, like e-mail.

This will be the first time since independence that physical copies of Budget documents will not be shared with MPs to avoid the risk of COVID-19 infection, the sources said, adding all MPs will get soft copies of the Budget and Economic Survey. The familiar sight of trucks loaded with budget papers in Parliament on the budget day and scanning of these by the security guard will also be given a miss. The Budget for FY22 will come against the backdrop of an economic contraction of 7.7 per cent, the first time in the history of independent India. So, all stakeholders have great expectations from the upcoming Budget, which could provide a healing touch to the pandemic-battered economy and push growth. Even Finance Minister Nirmala Sitharaman last month promised a ‘never before’ like Union Budget to the people of India.