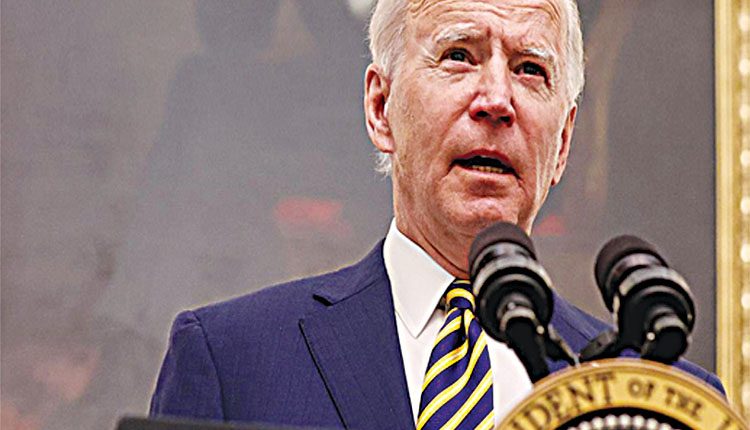 Washington, Jan 24 (Agency) U.S. President Joe Biden on Friday ordered the faster issuance of pandemic stimulus checks to needy families and increased food aid for children who normally rely on school meals, an effort to ease Americans’ burdens while Congress negotiates over his proposed $1.9 trillion economic stimulus package. In the opening days of his administration, Biden is emphasizing that the government must tackle the coronavirus crisis with urgency after his predecessor Donald Trump largely played it down. More than 400,000 Americans have died from the virus and millions of jobs have been lost.

“It’s not just to meet the moral obligation,” Biden said in remarks at a White House event to sign two executive orders. “This is an economic imperative.” Biden said his stimulus package to address the economic effects of the pandemic has support from business, labor, Wall Street and Main Street. “A lot of America is hurting. The virus is surging. … Families are going hungry. People are at risk of being evicted. Job losses are mounting again. We need to act. No matter how you look at it, we need to act,” Biden said. Republican lawmakers have questioned the price tag on pandemic aid and a separate investment proposal for infrastructure, green energy projects, education and research.

“We’re at a precarious moment for the virus and the economy. Without decisive action, we risk falling into a very serious economic hole, even more serious than the crisis we find ourselves in,” Deese said. Biden’s actions were not a substitute for legislative relief, Deese said, with about 16 million people now receiving some type of unemployment benefit and an estimated 29 million who do not have enough to eat. A major pillar of the Biden plan is greatly increasing the number of people who are being vaccinated against the novel coronavirus. In December, Biden set a goal of 100 million vaccinations in his first 100 days in office and on Friday he spoke of exceeding that number.

“We’re going to, God willing, not only do 100 million, we’re going do more than that,” he said. The U.S. Centers for Disease Control said it had administered 19.1 million doses of the vaccine as of Friday. Women, minorities and low-income service workers have been disproportionately hurt, with Black and Hispanic workers facing higher jobless rates than white workers. In an early test of whether Republicans might support Democrat Biden’s plans for coronavirus relief, infrastructure investment and tax increases, the U.S. Senate Finance Committee voted unanimously on Friday to approve Janet Yellen, Biden’s choice for Treasury Secretary, paving the way for her confirmation by the full chamber. Biden’s hopes for speedy action on his legislative agenda and Cabinet appointments are complicated by the expected trial of Trump in the Senate as early as next week and bipartisan squabbling over operations in an evenly split Senate. In an executive order on Friday, Biden asked the Treasury Department to consider taking steps to expand and improve delivery of stimulus checks, such as by establishing online tools for claiming payments.