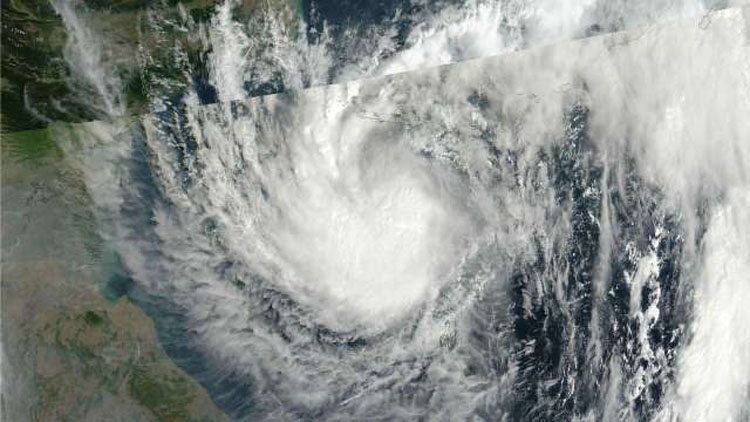 Chennai, Nov 23 (Agency) The depression over southwest and adjoining southeast Bay of Bengal will intensify into cyclonic storm ‘Nivar’ and would cross the Tamil Nadu and Puducherry coasts on Wednesday, cuasing extremely heavy rainfall in the State. A bulletin issued by the Met office on Monday said the depression moved northwestwards in the past six hours and lay centred about 600 km south-southeast of Puducherry and 630 km south-southeast of Chennai.

It is very likely to intensify into a cyclonic storm ‘Nivar’ during the next 24 hours, move northwestwards and cross Tamil Nadu and Puducherry coasts between Karaikal and Mamallapuram, about 55 km from here, on November 25 afternoon. The Met office has issued a Red Alert for Tamil Nadu, Puducherry and Karaikal on November 25 and yellow alert for today, tomorrow and Friday. Under its influence, the rainfall activity is likely to increase over south peninsular India from today onwards with fairly widespread to widespread rainfall/thunderstorm activity over Tamilnadu, Puducherry and Karaikal from November 24 to 26 and over south Coastal Andhra Pradesh, Rayalaseema and Telangana on November 25 and 26, the bulletin said. Isolated extremely heavy rainfall activity is also very likely over Tamilnadu and Puducherry during the period. Heavy rain is likely to occur at isolated places over Nagapattinam, Thanjavur, Tiruvarur districts of Tamil Nadu and Karaikal area.