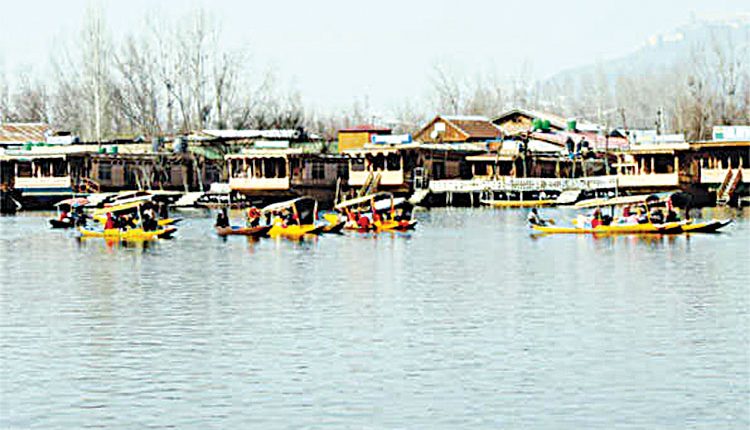 Srinagar, Feb 14 (FN Agency) People continued to enjoy summer-like weather for the fifth successive day on Sunday due to sunshine while the night temperature dipped and settled below normal at most places in Kashmir valley. A Met department spokesperson told that the weather will remain dry during the next three days, which could result in further dip in the night temperature though the mercury during the day is expected to improve further in Kashmir valley.

After witnessing below normal night temperature, people woke up to a sunny Sunday morning in Srinagar. Against 1.2 degree recorded on Saturday, the night temperature in the city dipped and settled at minus 0.4 degree, which is slightly below normal. However, weather during the day remained pleasant even as sun shone bright in the city, where people were seen basking in the sun in parks, balconies and open fields. The maximum temperature recorded on Saturday in the city was about 4 degree above normal. “The skies will be clear during the next 24 hours in Srinagar, where the maximum and minimum temperatures will be around 16 degree and zero degree, respectively,” he added. Meanwhile, people associated with Floriculture said due to early improvement in the weather conditions, the bud breaking in flower plants has started. However, they said that the process could be adversely affected if the temperature decreases.

World famous ski resort of Gulmarg, which is covered under several feet of snow, also witnessed pleasant weather as bright sunshine greeted tourists, including adventure lovers. Gulmarg, which is known for its ski slopes and quality of snow, was the only place in the valley where the mercury improved. Against minus 3.8 degree recorded on Saturday, the mercury improved and settled at 3 degree, which is 3 degree above normal.

“The tourist resort is crowded with tourists, particularly locals, who are spending their weekend at Gulmarg. Tourists, particularly adventure lovers, are out on ski slopes, enjoying different snow related activities on a sunny day,” a hotelier from Gulmarg told UNI over the phone. The night temperature at world famous tourist resort of Pahalgam, about 100 km from here in south Kashmir, dipped about a degree from Saturday and settled at 3.8 degree, which is about a degree above normal. The weather at the health resort also turned pleasant during the day due to sunshine. The mercury at Qazigund, gateway to the valley, Kupwara in north Kashmir and tourist resort of Kukernag dipped and settled at minus 3.2 degree, minus 1.8 degree and minus 0.5 degree, respectively.