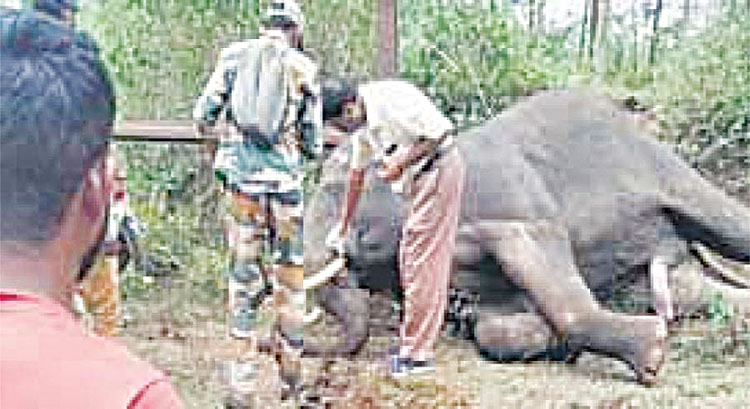 Bhubaneswar, Feb 14 (FN Representative) The mysterious death of six elephants in a fortnight inside the Karlapat wildlife sanctuary in Kalahandi district of Odisha has baffled the forest officials and wildlife lovers. The wildlife sanctuary reported the first death of an elephant at Tentulipadar on February one last.

Later Ghusurigudi in the sanctuaries reported the death of one elephant each on February 8,10 and 12 last. A 20 day old baby elephant died in Karlapat wildlife sanctuary yesterday while one female elephant died due to Septicemia inside the Karlapat forest today. With the death of a female wild elephant the total number of jumbo casualties went up to six in the last 14 days. Baffled by the death of so many wild elephants in a short span of time, a two member expert team led by Odisha University of Agriculture and Technology (OUAT) Laboratory Coordinator Niranjan Sahu reached Karlapat yesterday to probe the cause of death of elephants. Officials suspected that the elephants might have died due to bacterial infection transmitted from a pond in the forest.

Meanwhile, the postmortem of the elephants had been conducted in OUAT. The Forest officials advised people close to the forest not to allow their cattle to graze in the area suspected to have been infected by bacteria and started an immunisation programme for the cattle. The Forest officials also disinfected all water bodies inside the sanctuary as a preventive measure in a bid to check the spread of infection by the bacteria to other animals.