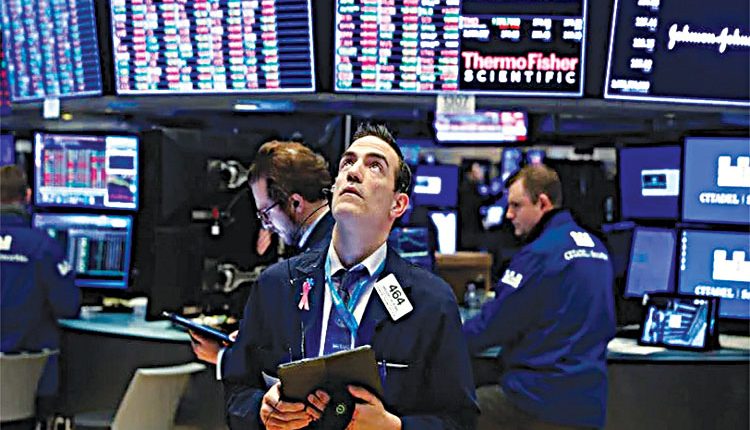 New Delhi, Apr 16 (FN Agency) The S&P 500 and the Dow hit record highs on Friday after Morgan Stanley wrapped up quarterly earnings reports from the big U.S. banks with a profit surge, while optimism about a solid economic rebound put the main indexes on course for weekly gains. Nine of the 11 S&P indexes were trading higher, with only the communication services and information technology indexes edging lower after outperforming in the previous session. Wall Street’s three main indexes have bounced this month as upbeat economic data, a solid start to the first-quarter corporate earnings season and the Federal Reserve’s pledge to keep interest rates low despite higher inflation boosted demand, particularly for richly valued technology stocks.

Still, the investment bank’s shares fell 1.2% as it also disclosed an almost $1 billion loss from the collapse of private fund Archegos. Shares of JPMorgan, Goldman Sachs, Bank of America, Citigroup Inc and Wells Fargo and Co were up as much as 1.6%.

“So far, the financial sector has reported very strong earnings and that could be key for this earnings season,” said Peter Cardillo, chief market economist at Spartan Capital Securities in New York. “There seems to be a new burst of enthusiasm, also because we have a back off in (bond) yields. It is certainly helpful in terms of risk.” Global equities also hit record highs as China’s GDP grew at a record 18.3% in the first quarter.

Tech behemoths Apple Inc, Amazon.com Inc, Tesla Inc Microsoft Corp, which led Wall Street’s recovery last year from the coronavirus-fueled crash, slipped between 0.4% and 1.5%. Bitcoin related stocks including Riot Blockchain and Marathon Digital slumped 9% after Turkey banned the use of cryptocurrencies and crypto assets to purchase goods and services. Advancing issues outnumbered decliners by a 1.32-to-1 ratio on the NYSE, while declining issues outnumbered advancers for a 1.57-to-1 ratio on the Nasdaq. The S&P index recorded 136 new 52-week highs and no new low, while the Nasdaq recorded 121 new highs and 64 new lows.