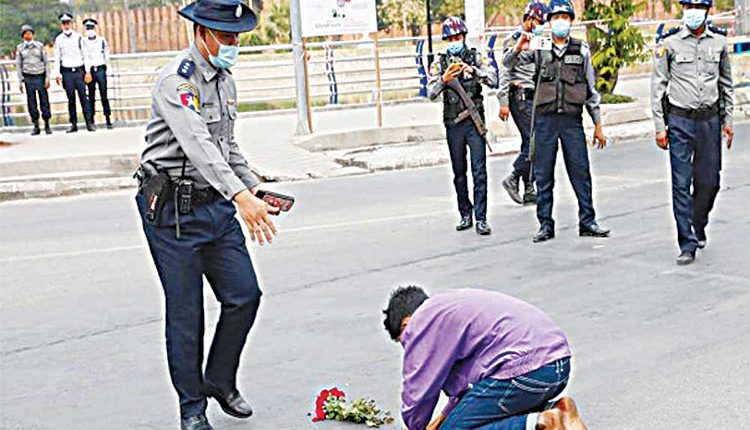 Naypyitaw, Feb 9(FN Bureau) People in Myanmar defied the ban by authorities on large gatherings and came out in large numbers onto the streets to protest against the military coup on Tuesday, braving water cannons used by the police to disperse protesters. The military has imposed a curfew in the cities of Yangon and Mandalay and prohibited gatherings of more than five in one place, the BBC reported.

These new rules were imposed after the country saw three straight days of mass protests, following the overthrow of Aung San Suu Kyi’s elected government in a coup and the house arrest of Suu Kyi and other senior leaders. Myanmar state TV had on Monday warned that action “will be taken” against those breaking the law. However, the BBC has reported that there has yet to be a sustained effort on the part of the military to break up the protest, which many believe is because the army does not want a repeat of the bloodshed of the past. On Monday, military leader Min Aung Hlaing warned that no one is above the law and violators will be punished, although he did not issue a direct threat to protesters.

But the protestors have remained defiant as they returned to the streets on Tuesday demanding a restoration of democracy in the country. The fourth day of protests saw large crowds facing off with police who fired water cannon in the city of Bago. Water cannon was also used on protesters in the capital Naypyitaw, with reports of injuries. In several other cities across Myanmar, reports have come in of protesters continuing to gather in large numbers.

Myanmar military rejected request to speak with Suu Kyi
Washington, Feb 9 (Agency) The Myanmar military has rejected the US’ request to speak with State Counselor Aung San Suu Kyi, US State Department said on Monday. “Shortly after the events of February 1, we made an effort to reach out to Aung San Suu Kyi, we did that both informally and we did that formally as well, those requests of course were denied,” Sputnik quoted US State Department Spokesperson Ned Price as saying. Last week, Myanmar’s military overthrew the government and declared a year-long state of emergency after accusing Aung San Suu Kyi’s party of election fraud held last year, in which Nobel Laureate Suu Kyi’s National League for Democracy (NLD) party secured the majority. US officials have said the Biden administration is crafting measures to impose on Myanmar’s military if it does not relinquish power. During a press briefing, Price said: The United States is concerned about the Myanmar military’s decision to restrict peaceful protests in Myanmar. “We stand with the people of Burma [Myanmar], support their right to assemble peacefully, including to protest peacefully in support of the democratically-elected government… we’re of course very concerned about the military’s recent announcement restricting public gatherings,” Price said.