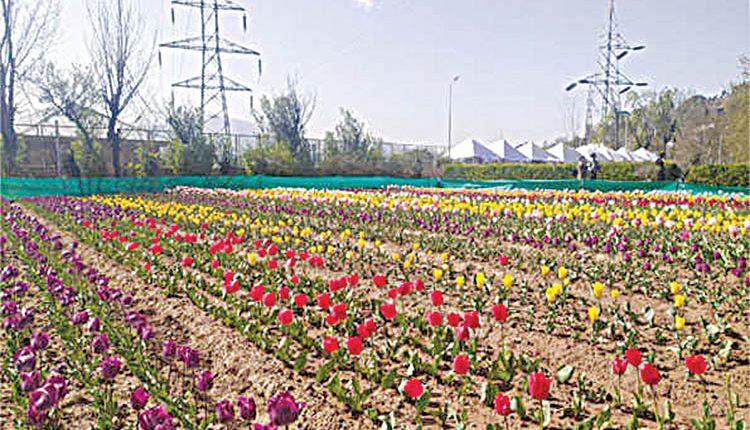 Jammu, Mar 9 (FN Representative) Although Jammu and Kashmir Administration is preparing for the gala Kashmir Tulip Festival but more than 9000 colourful tulips are ready to welcome the tourists at the scenic Kud area of mountainous Udhampur district. However, Udhampur District Administration is also organising a day-long mega cultural event at Kud on Tuesday with an aim to give a fillip to the tourism sector.

“The Tulips have been planted at High Land Park in Kud and the area of one lawn is of around 1.5 Kanal which is being used for tulips,” an administrative official here told. He said that the aim behind organising the tulip initiative at Kud was that the people of Jammu also get to experience the beauty of these mesmerising flowers. “This year due to COVID the department of Floriculture has not planted tulips in the Sanasar area of Ramban district but at Kud,” he said and added that a total of 9300 bulbs of five varieties of different colours have been planted.

“The expansion of tulips is limited in Udhampur district so far but more land in temperate region could be brought after assessing feasibility by the Floriculture department,” said an official adding that the Department has been carrying out plantation at Sanasar also in the past. Pertinent to mention here that Sanasar was the first tourist destination in the Jammu region to plant tulip flowers to boost tourism. District Administration Udhampur is organising the event in collaboration with the Tourism Department. Tourists visiting UT especially Katra, Patnitop and other parts from all over the country would be attracted through digital platforms by the tourism department.