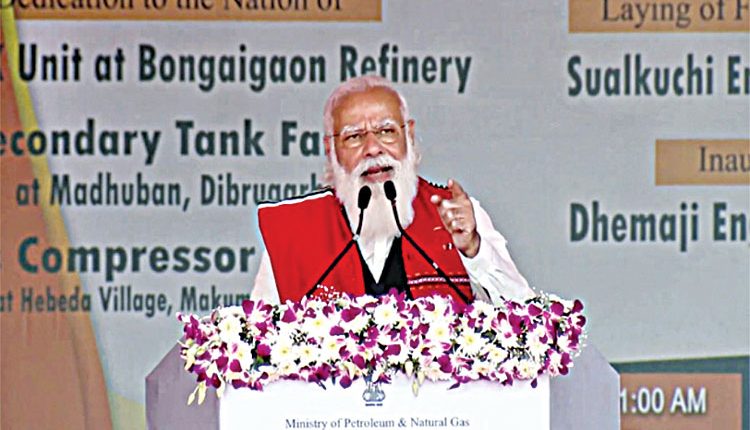 Guwahati, Feb 22 (FN Bureau) Prime Minister Narendra Modi today said that his belief of North East becoming the new engine of India’s growth is being realized and both the Centre and the states are working collaboratively to develop the region’s infrastructure. “I said that the North East would become the new engine of India’s growth. Today, we see this belief being realized,” Mr Modi said after he dedicated important oil and gas projects to the nation in an event organized at Silapathar in Dhemaji in Assam.

Talking specifically about Assam, Mr Modi blamed the previous government for according step-motherly treatment to the region in the north bank of the Brahmaputra in Assam. “The North Bank’s tea gardens have a big role in Assam’s economy. The lives of people working in these tea gardens should be made easy, this is also one of the top priorities of our government,” Mr Modi said. PM Modi said the state and the Central government are working together to increase farmers’ income by giving them modern farming facilities. “Assam’s tea, tourism, handloom and handicraft will strengthen the state’s self-reliance,” Mr Modi said.

Listing out various schemes announced for the region, Mr Modi said the government is focussed on promoting fishing. The Union Budget 2021-22 allocated Rs 20,000 crores to strengthen the fishing sector of our nation. Mr Modi said due to the efforts of the state government, today more than 20 engineering colleges have been opened here. “The gas pipeline network is being prepared in the country, optical fibre is being laid to every village in the country, pipes are being installed to deliver water to every house, those are the new fate lines of Bharat Maa,” Mr Modi maintained.