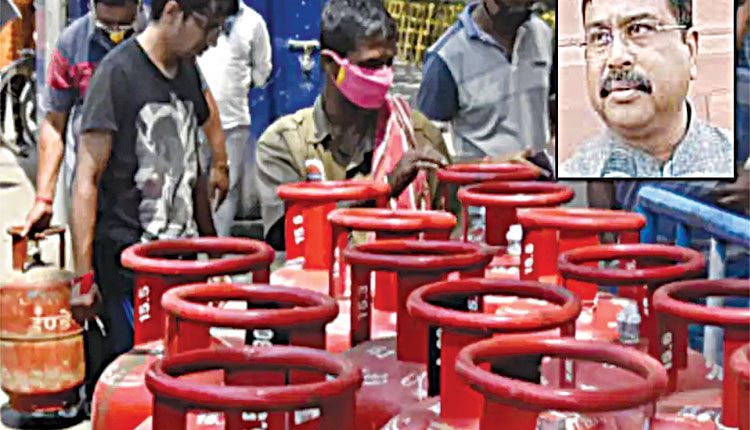 New Delhi, Mar 11 (Mayank Nigam) Cooking gas LPG consumption rose 7.3 per cent in the last three months despite a steep price rise, with usage among the PMUY beneficiaries, who are mostly poor rural households, jumping near 20 per cent, state-owned oil companies said. ‘LPG consumption has improved amongst PMUY customers,’ Indian Oil Corporation (IOC) said in a statement. Cooking gas consumption between December 2020 and February 2021, the period that saw a massive Rs 175 per cylinder increase in rates across all categories, jumped 19.5 per cent among the Pradhan Mantri Ujjwala Yojana (PMUY) beneficiaries — the over 8 crore poor households that got free connection since 2016. Oil Minister Dharmendra Pradhan had told the Lok Sabha earlier this week that cooking gas prices have doubled since the BJP came to power seven years back. The retail selling price of domestic gas was Rs 410.5 per 14.2-kg cylinder on March 1, 2014. This month, the same cylinder costs Rs 819.

While there was an overall 23.2 per cent surge in LPG consumption in the initial quarter of the current fiscal year mainly due to free LPG cylinders provided to PMUY beneficiaries to tide over problems of the COVID-19 lockdown, cooking gas demand continued to improve in December-February with a 7.3 per cent year-on-year growth, the statements said. PMUY customers consumed 10.1 lakh tonnes of LPG during the three months, up from 8.45 lakh tonnes a year back. ‘Compared year-on-year, the overall domestic LPG sales have registered a handsome growth of 10.3 per cent during the current fiscal (April 2020 to February 2021),’ it said. To alleviate the problems faced by the marginalised during the lockdown, PMUY beneficiaries were provided with three free LPG refills at a cost of Rs 9,670 crore, it said.

The aggressive rollout of clean cooking fuel to replace polluting fuels such as firewood and coal has led to an improvement in LPG penetration to more than 99 per cent, up from 55 per cent in 2014. ‘The widespread acceptance of LPG as the preferred kitchen fuel of almost every Indian showcases the surging popularity of LPG as the primary kitchen fuel as compared to other traditional fuels such as firewood,’ the statements said. IOC said while the upfront per kg cost of firewood is cheaper, LPG is a more economical fuel in the long run when costs such as the total volume of fuel consumed and handling costs are factored in. ‘Even at the current rates, LPG is cheaper than firewood/ other traditional fuels in many states, largely on account of its overall heating efficiency,’ it said. Besides, using LPG has significant health benefits. ‘The financial savings on account of LPG as fuel, in addition to other benefits such as better health and time saved, make it an enduring choice of every Indian,’ the statements said. Under PMUY, 8 crore poor households were given free cooking gas connections at an expenditure of Rs 12,800 crore.