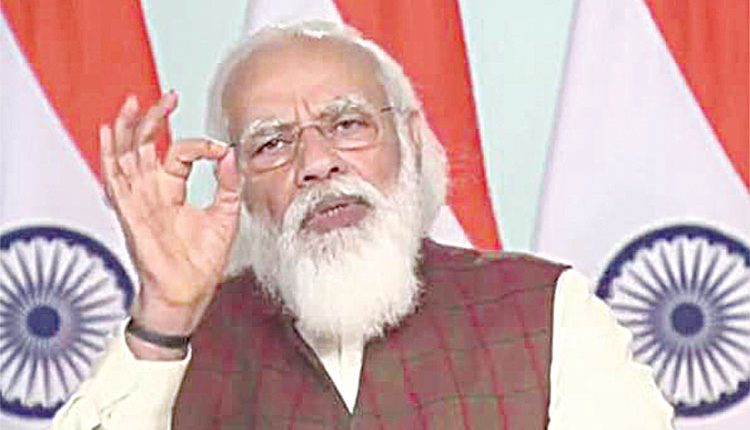 New Delhi, Dec 29 (FN Bureau) Prime Minister Narendra Modi said on Tuesday the government is focusing on the five wheels of development–highways, railways, airways, waterways and i-ways–on the path of making India a big economic power and stressed the need for keeping the development of the country’s infrastructure away from politics. In an obvious strong criticism of the incidents of vandalism in Punjab on Monday where nearly 1400 Jio (Reliance) mobile towers were damaged by some miscreants in protest against the three farm laws, the Prime Minister voiced his opposition to damaging public property during demonstrations and movements and said one should not forget one’s obligation to the nation while expressing democratic right.

Calling for keeping the development of the country’s infrastructure away from politics, he said the country’s infrastructure should be ‘’a mission to benefit many generations, not five years of politics.’’ ‘’If political parties have to compete, there should be competition in the quality of infrastructure, competition on speed and scale.’’ Groups of farmers allegedly vandalized more than 1400 Jio (Reliance) mobile towers in Punjab on Monday leading to a communication outage in the state. Following the incidents, Punjab Chief Minister Amarinder Singh directed the police to take strong action against the culprits. The Prime Minister who was speaking after inaugurating the New Bhaupur–New Khurja section and the Operation Control Centre of Eastern Dedicated Freight Corridor in Uttar Pradesh through video conference, said his priority is to provide the best connectivity in the country.

Union Minister Piyush Goyal and Uttar Pradesh Chief Minister Yogi Adityanath were also present on the occasion. Describing infrastructure as the biggest source of any nation’s strength, the Prime Minister said farmers could now send their produce through rail to any big markets across the country, safely and at a low price. Through this Freight corridor their produce would reach even faster and in Uttar Pradesh a lot of storage and cold storage facilities had come up due to Kisan Rail. ‘’…when the first goods train runs in the Khurja Bhaupur freight corridor, we can hear the roar of the Self reliant india,’’ he said. The Prime Minister stressed the need for dedicated freight corridors and said that as the population grew, economy grew, the demand on freight increased manifold.

Since both passenger trains and goods trains ply on the same track, the speed of the goods train is slow. When the speed of the goods train is slow, and there is interruption in place, the cost of transportation will be high. Being expensive, domestic products lose the competition in markets within the country as well as abroad. The Dedicated Freight Corridor was planned to change this situation. Initially two Dedicated Freight Corridors were planned. The Prime Minister said that with such dedicated freight corridors problems of delayed passenger trains would be resolved. Due to this speed of the freight train also would increase three times and would be able to carry double the volume of goods. ‘’Ease of Doing business would increase and India would become an attractive place to invest and many new opportunities for self-employment will also be created.’’ Pointing out that industry, businessmen, farmers or consumers, everyone would benefit from this dedicated freight corridor, he said the freight corridor would boost Eastern India which is left behind industrially. About 60 percent of the corridor falls in UP. It would attract a lot of industries towards UP. Kisan Rail would be benefited due to this dedicated freight corridor Lashing out at the opposition the Prime Minister lamented the huge delays in the past in implementation of the Dedicated Freight Corridor and said until 2014 not even a kilometer of track could be laid. However, after the formation of the government in 2014, about 1100 km of the work got completed in the next few months.

He criticized the mentality of the previous governments which focused on increasing the number of trains rather than the tracks on which the train was to run. Not much investment was done on modernization of the rail network. This was changed with the elimination of separate rail budgets, investing on the rail track. He said the Government focused on widening and electrification of the rail network and elimination of unmanned rail crossings.