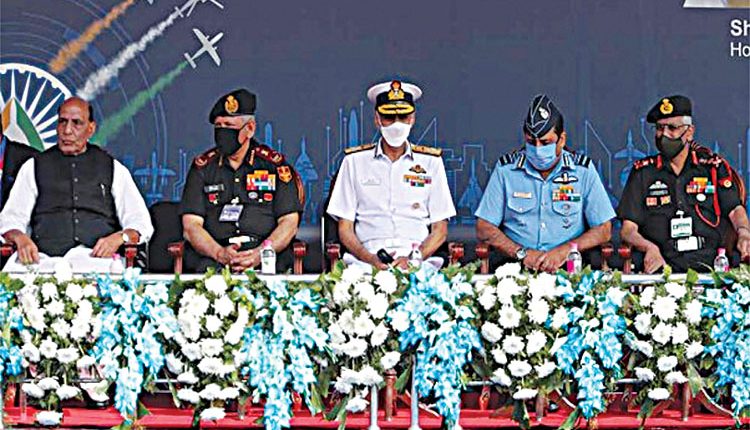 Bengaluru, Feb 3 (FN Bureau) Defence Minister Rajanath Singh on Wednesday said that the country is fully geared up to face any air strike. Mr Singh made the observation after inaugurating the three-day 13th biennial International premier aerospace and defence exhibition Aero India 2021 at Yelahanka air base, on the outskirts of the city amid the Covid-19 pandemic with a buzz around ‘Atmanirbhar Bharat Abhiyaan’ and ‘Make in India’ push. He said that with a combination of both physical and virtual exhibition, the event is the world’s first hybrid aerospace show. “It was also a proud movement. India is hosting Asia’s biggest airshow and thank the Karnataka government for its support in conducting the air show,” he added. Recollecting the role played by 12th Century reformer Basavanna and the great engineer Sir M Vishwavesharaiah, he said under Atmanirbhar country’s defence sector has been modernising and upgrading itself at various levels. For this purpose 30 million US dollar was earmarked, he added.

Underlining that India’s contribution in the field of defence has been closely watched by the entire world and some countries are eager to partner and it would be utilised to further modernize the defence sector. He said that the union government committed to strengthening the defence sector furthermore with ‘Make in India’ development to reach the goal of emerging as one of the strongest defence forces in the world. Along with Indian, many foreign airplanes will also show their strength in this air show. Air display will be held twice a day. A total of 42 planes will exhibit its strength. A total number of 63 planes, including India and other countries, will fly. Three thousand people are allowed to watch the air show every day. Speaking on the occasion, Karnataka Chief Minister B S Yediyurappa said, “We are proud to host an event of this magnitude in the state”. He said Prime Minister Narendra Modi’s vision of atmanirbharta for which Karnataka is contributing in this way, nearly 65 per cent of the war planes are manufactured in Karnataka.

He said the Aerospace Park on 1000 acres in Devanahalli is coming up. The organisers have made it compulsory for the visitors to produce Negative Covid-19 RT-PCR test report (dated January 31, 9 am or later) to attend the three-day event, where each day only 3,000 visitors will be allowed at the flight display venue in view of the pandemic. As many as 601 exhibitors — 523 Indian and 78 foreign — and 14 countries have confirmed participation, they said. On day one, Surya Kiran Aerobatic Team of the Indian Air Force and Sarang helicopter display team conduct aerobatic display. Even American B-1B Lancer aircraft took part in the Aero India show. The aircraft flew from an American airbase in South Dakota, United States for over 26 hours to reach the city. Sukhoi Su-30MKI fighters in Trishul formation were also spotted in the sky during the show. Aircraft also took part in the flypast in Atmanirbhar formation at Aero India-2021.

The Defence Minister said that Aero India 2021 will display the vast potential of India and the multifarious opportunities it offers in the field of defence and aerospace. “It’ll not be incorrect to say that Aero India 2021has truly gone digital and global. The presence of about 540 exhibitors, Defence Ministers, delegates, service chiefs and officials from more then 55 countries shows growing optimism of the global community,” he added. India is a victim of state sponsored and state –inflicted terrorism, which is now a global threat, he said. Talking about China’s aggression in Estern Ladakh, he said, “We have long witnessed unfortunate events to employ force to change the status quo along our unresolved borders India is vigilant and prepared to counter and defeat any misadventure to defend our people and the territorial integrity at all costs”, he added. Prime Minister Narendra Modi, ahead of the show said that the event will add impetus to India’s quest to become ‘ aatamnibhar (self reliant). India offers unlimited potential in defense and aerospace. Aero India is a wonderful platform for collaborations. he said in a tweet.