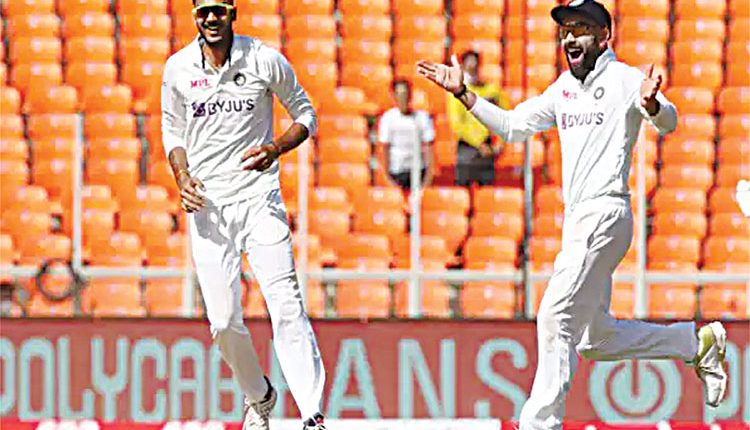 Ahmedabad, Mar 4 (Agency) On the eve of the final Test, Joe Root urged his batsmen to be brave and play with freedom. So when the England captain won the toss and chose to make first use of a fresh pitch, he would have hoped for more than 205 from his side. Ben Stokes made 55, Daniel Lawrence got 46 while Ollie Pope fought hard for his 29 and batted out 87 deliveries. Yet, at no stage did they threaten to put India under pressure. Axar Patel picked four wickets while R Ashwin got three. Mohammed Siraj was equally impressive as he accounted for Root and Jonny Bairstow. Zak Crawley and Dom Sibley made watchful starts but were clearly carrying scars from the previous game. Axar took just two balls to strike – as Sibley inside-edged a straight delivery back to his leg stump. Crawley, however, had taken his captain’s advice. While he looked to use his feet, and try and nullify Axar, he couldn’t quite get the execution right. He charged down the track and lobbed a simple catch to mid-off.

At 10 for 2, the doubting Thomases were out with their ‘here we go’ cards. Siraj had Root chasing at wide deliveries as the England captain tried to settle in. The bounce too had Root hopping before he was pinged plumb in front in the 13th over. England were reeling at 30 for 4 but Bairstow and Stokes eased some nerves in the dressing room and took the side to 74 for 3 at lunch. While Bairstow continued to feast on wide deliveries, Stokes made his intentions clear when he hit Ashwin for a six on the second ball he faced from the spinner. Bairstow was given out lbw to a bail-trimmer in the fourth over of the second session. Stokes found a good ally in Pope as the pair took the visitors past 100. Stokes reached his half-century with an authoritative reverse-sweep and looked set for a lot more. However, he failed to read the line of Washington Sundar’s straight one and was out lbw in the 47th over. England, however, refused to throw in the towel even when the scoreboard read 121 for 5.

Pope continued to resist while Lawrence looked fluent during his 74-ball stay. Their 45-run stand frustrated India a touch as they struggled to find a way past their defence. Lawrence particularly took on the spinner to put some pressure on both Axar and Ashwin. Pope was unfortunate as he tried to use his feet against Ashwin. He came down the track but the inside edge hit the back leg and lobbed to short leg. Lawrence continued to attack the spinners but eventually was stumped after becoming over-confident. There wasn’t much from Ben Foakes, Dominic Bess, Jack Leach and James Anderson on a pitch where the ball didn’t turn square or skid on quicker after pitching. England looked far more settled than they did in the previous Test but couldn’t quite execute their gameplans. England added Lawrence to strengthen their batting and left out Jofra Archer and Stuart Broad. James Anderson, the only front-line pacer in the squad, struck on the third ball when he had Shubman Gill lbw to another bail-trimmer. Rohit Sharma and Cheteshwar Pujara saw off the remaining day to take India to 24 for 1.