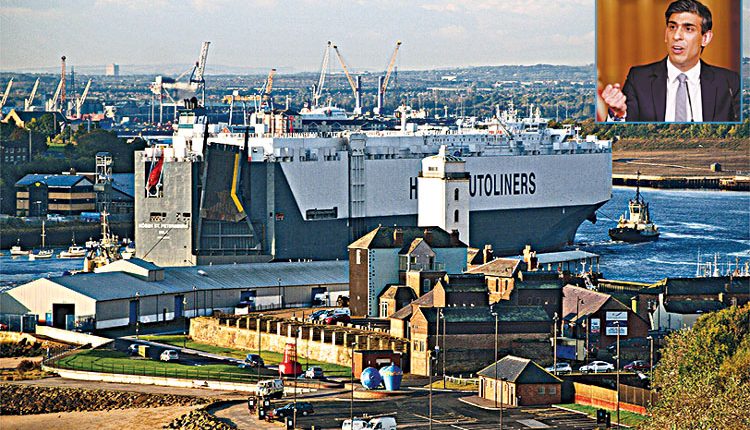 Moscow, Mar 4 (FN Bureau) Eight of England’s largest coastal cargo ports are set to become freeports in a ‘unique British way,’ allowing businesses to benefit from tax cuts and other financial benefits in a bid to boost investment and create jobs across the country, Rishi Sunak, UK’s Chancellor of the Exchequer, said on Thursday. “They [freeports] are special economic zones, which have different rules that are going to attract jobs, investment and trade to places like Teesside where I am now standing. I am incredibly excited about what this means,” Sunak stated to the Sky News broadcaster.

According to the treasury secretary, establishing freeports is part of the UK’s policy to “level up opportunities across the country” by bringing new businesses to coastal zones previously reliant on coal and steel production. Better tax planning, such as no stamp duty, full rebates for construction and machinery investments, five years of zero business rates, lower tariffs and customs obligations, will motivate SMEs and innovative industries to settle in the zones. There are over 80 freeports operating within the EU, but the European Commission has been recently clamping down on the zones over links to terrorism and organized crime, as well as high incidence of money laundering, tax evasion and corruption. Nevertheless, in the chancellor’s vision, freeports could become centers for more sustainable businesses — such as the capture and storage of carbon, manufacturing of vaccines and production of green energy.

“It’s a policy that we can now fully pursue in a unique British way now that we’ve left the European Union and we’ve had great reaction to it,” he noted. The eight freeports will be located in East Midlands Airport, Felixstowe and Harwich, the Humber region, the Liverpool City region, Plymouth, Solent, Thames and Teesside. Zones will stretch over as much as 40 kilometers (25 miles) around their designated ports and will link other areas into so-called “tax sites.” Sunak first introduced the idea of freeports five years ago, during his time as a member of parliament. Over the years, it has become a controversial topic with many top UK experts and politicians raising concerns that such “mini-tax havens” may become grounds for illicit activities similar to the ones located in the EU.