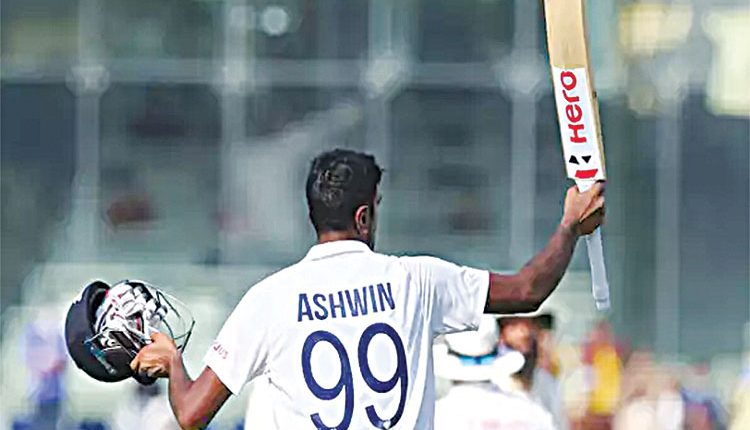 Chennai, Feb 15 (FN Agency) It’s another form of art, as simple as that,” said Ashwin on batting against spin in conditions favouring the slow bowlers. The offspinner spoke to the media at the end of Day 2 after bagging his 29th five-wicket haul, insisting that batting against spin isn’t any tougher than batting against pace on seam-friendly wickets. While experts on social media were taking sides commenting on the nature of the pitch in Chepauk, Ashwin walked the talk on Day 3, scoring his fifth Test hundred, to prove that superior skills are what’s required to take the pitch out of the equation. It wasn’t a walk in the park for Ashwin, who had to do plenty of hard work after a top-order collapse, even though India had the luxury of a hefty first-innings lead. With Jack Leach and Moeen Ali striking at regular intervals, and Ben Foakes backing them up with his excellent wicketkeeping, India slipped to 106 for 6 in the first session. Cheteshwar Pujara was run out in a bizarre manner, Rohit Sharma and Rishabh Pant were out stumped off Leach, while Ajinkya Rahane and Axar Patel fell to Moeen Ali as India lost five wickets for 51 runs.

Ashwin entered the crease and supported skipper Virat Kohli in a 96-run partnership that was the driving force behind India setting England a mammoth target. Kohli and Ashwin batted for close to 30 overs, showcasing good application – strong in defence, running well and rotating the strike regularly, and cashing in on loose deliveries – to lead India’s rearguard effort. Ashwin was the aggressor in the partnership, using the sweep shot to good effect for regular boundaries. Kohli had curbed some of his favourite shots in his bid to steady India, preferring to unfurl the cover drive only in the second session. But the skipper fell against the run of play, out leg-before to Moeen while trying to play off the back foot. With Kuldeep Yadav following a short while later, Ashwin had the company of Ishant in a 27-run ninth-wicket stand as he closed in on three-figures and extended India’s lead past 400. But Ishant’s attempted sweep led to his downfall, leaving Ashwin in danger of running out of partners. He was on 77 off 114 when last man Mohammad Siraj came to the crease and decided to take on the spinners for regular boundaries. To Siraj’s credit, he did not get carried away as he supported Ashwin as he approached the milestone. And the No. 8 reached there in style clubbing a six off Moeen before edging one to the boundary to get his ton off 134 deliveries. There were some fireworks from Siraj after that, but India’s innings came to an end with Ashwin chopping on an Olly Stone delivery.

The lessons were played out in front of them and the England batsmen took a leaf or two from that book, with Rory Burns and Dan Lawrence batting a lot more positively than the visitors did in the first innings. It was still spitting and turning square but the England batsmen were proactive, although their technical shortcomings against spin led to regular wickets. Dom Sibley was trapped in front by a straight delivery from Axar, Rory Burns fell to a leading edge off Ashwin while nightwatchman Leach handed a catch to leg slip as England were 53 for 3 at Stumps on Day 3, chasing 482 for victory.