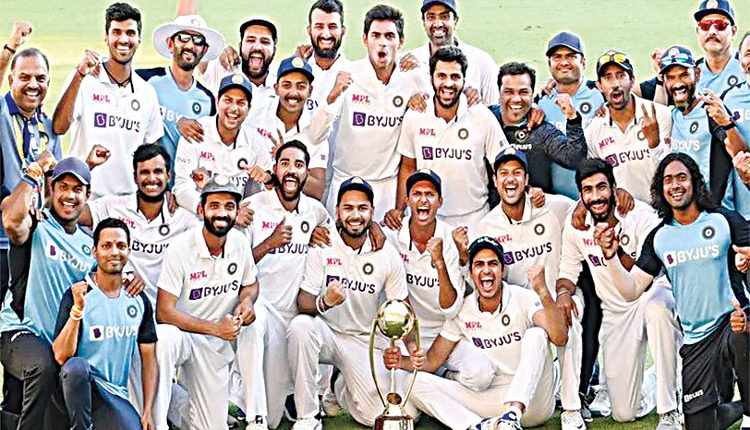 Brisbane, Jan 19 (FN Agency) India beat Australia by three wickets in fourth and final Test to claim the series 2-1 and retain the Border-Gavaskar Trophy, here on Tuesday. Resuming at four for none on the final day, India overhauled the target of 328 in the fourth innings to with 18 balls to spare in a thrilling encounter which went down to the wire. Just when sieges continue to make headlines world over, India have one of their own at the Gabba, Australia’s strongest home venue where they hadn’t lost a Test match in 32 years. All that changed today.

India had 145 runs to get in the final session, Australia needed seven wickets. Pant was on 10 then, having come to the crease on the back of a ramp shot gone wrong from India captain Ajinkya Rahane. He took his time, much like he did during his 97 in Sydney, and delivered India safely to Tea. Waiting on the other side was Tim Paine, playing with the fields, bringing in the long-on for every last ball of the over from Nathan Lyon and asking him to go over the top. And so he did, hitting a six after the previous delivery had burst off one of the cracks.

Pant was on 16 when a delivery did exactly that once again, but Paine missed a tough stumping chance, Steve Smith couldn’t collect the ball at slip and off it went to the boundary. India looked unstoppable after that, even as they lost their unflappable anchorman in Cheteshwar Pujara to the second new ball, to an equally unflappable Pat Cummins, after what was his slowest half century. Going into the last hour, India lost Mayank Agarwal caught in covers and had Washington Sundar join Pant, the allrounder playing only his first Test match. But he started from where he left off in the first innings, the only change being that this time he took the short ball on from Cummins and hoicked him for a six over deep square leg. He was out reverse-sweeping Lyon but his 29-ball 22 had done enough. India only needed 10 more runs off 25 balls.

Pujara’s day-long vigil allowed batsmen at the other end to take risks, starting with Gill in the morning session and Rahane later in the afternoon. Gill took only 146 balls for his 91 whereas Rahane raced to 24 off 22 before falling to Cummins, Australia’s fuel tank on this ragged final day. Cummins bowled 24 overs in total for a haul of 4-55. Gill fell to a loose drive off Lyon outside off, Rahane then chimed in with boundaries and then Pant did whatever he’s always promised to do to opposition teams as India’s wicketkeeper-batsman. And they were home. Earlier, Cummins had Pujara in trouble with his short balls right through the day, banging the pitch halfway and hitting the cracks spell after spell. Pujara copped blows on his helmet, his forearm and his face but didn’t lose ground. India needed that stability after losing Rohit Sharma very early in the day to another Cummins special: angling in, straightening and taking the outside edge.

That’s when Pujata and Gill put on 114 for the second wicket; Pujara only scored 26. Gill looked at home against Australia’s short ball ploy, hooking and pulling Mitchell Starc for consecutive boundaries at one point time. Australia will feel they stuck to that plan for a bit longer than they should have, but that wasn’t the only questionable tactic from Paine. Pujara didn’t have to deal with a silly point when Lyon was bowling, a tactic Shane Warne called “negative” on air. India’s three sessions panned out as 79/1, 100/2 and 145/4, showing their expert approach to this run chase. They needed to only draw to hold onto the Border-Gavaskar trophy but the “new India” which Virat Kohli spoke about at the start of this tour wanted more, and tellingly were able to be that even without him.