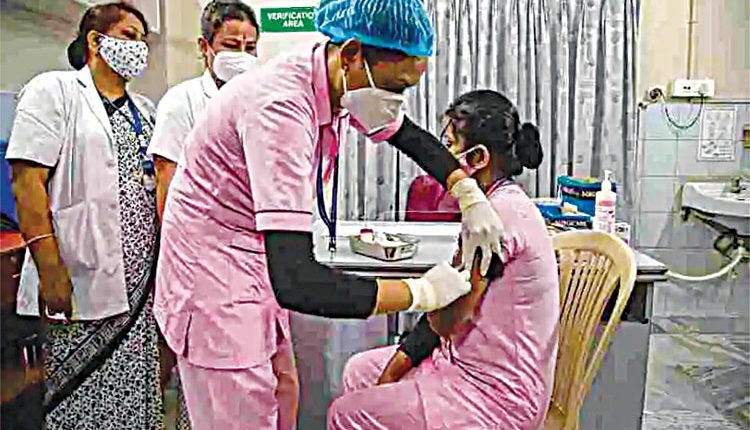 New Delhi/Bhubaneswar, Jan 19 (FN Representative) India appealed to frontline workers on Tuesday not to refuse vaccines for COVID-19, after almost all states failed to meet their targets in the first few days of one of the world’s biggest immunisation campaigns. The country has so far vaccinated 631,417 frontline workers with two shots manufactured locally, one developed by Oxford University and AstraZeneca, and another developed at home by Bharat Biotech in partnership with the state-run India Council of Medical Research.

The programme started on Saturday, with 30 million healthcare and other front-line workers first in the queue. The health ministry said India inoculated more people on its first day than the United States, Britain and France did. But it said it expected a greater number of volunteers to come forward, especially in major states like Tamil Nadu and Punjab that are lagging behind other states. Vinod K. Paul, who heads a government committee on vaccine strategy, told a news conference that health workers who failed to take vaccine doses that had been set aside for them were not fulfilling their “societal responsibility”.

“Please understand the whole world is clamouring for vaccines,” he said. “If our healthcare workers, our doctors and nurses, if they are declining to take it, I feel sorry,” he said. “I plead with them, on behalf of the government, because we don’t know what shape this pandemic will take going forward.” Some doctors have expressed doubt about the Bharat Biotech vaccine, which was given approval for emergency use without efficacy data from late-stage clinical trials. The government says it is safe and effective. Paul said he had received his own shot of it on the first day. India, the world’s biggest vaccine maker, plans to start exporting shots as early as Wednesday. Cases have come down in recent months. On Tuesday India reported 10,064 infections, the lowest in seven months, taking the total to 10.58 million. Deaths rose by an eight-month low figure of 137, taking the overall tally to 152,556.

Urban India raises focus on savings, cuts down luxury expenses due to COVID-19