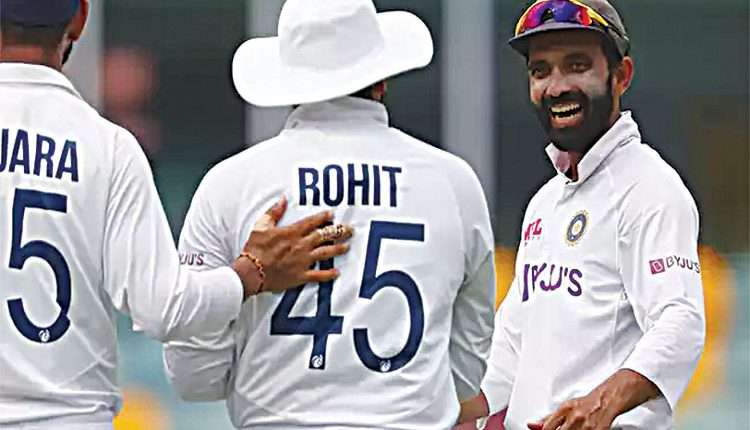 Brisbane, Jan 18 (Agency) Rain wiped out nearly all of the last session of day four soon after Australia had set India 328 to win the Gabba Test. India’s openers had only faced 11 balls, and still had a possible 23.1 overs left to negotiate before stumps, when rain sent the players hurrying into their dressing rooms for the second and final time on the day. On a pitch where inconsistent bounce has grown into a frequent menace, Australia should still have enough time left, in theory, to bowl India out and wrap up a 2-1 series win, but the weather forecast for day five isn’t encouraging. India will have been the happier side at stumps – not so much from the standpoint of the match situation as much as the fact that the bowling attack they cobbled together for this Test match, with each of their senior options unavailable, managed to challenge Australia again and keep them from running away with the game.

A short ball brought the breakthrough, with Harris leaving his gloves in the way of the ball while trying to duck underneath it. Washington Sundar, Thakur’s partner in crime with the bat on day three, then had Warner lbw with one that went with the arm to leave Australia 91 for 2 with two new batsmen at the crease. Those two batsmen, Marnus Labuschagne and Steven Smith, threatened to take the game away once more with a counterattacking stand full of daring forays down the pitch to Sundar’s offspin. But having raced to 25 off 21, Labuschagne had no answer to Siraj when he got one to straighten in the channel after angling into him, and Rohit Sharma pouched a thick edge at second slip.

Either side of tea, Smith – batting with adventurous use of feet and hands – and Cameron Green – blocking stolidly with a rather mechanical-looking forward stride – added 73 in 23.2 overs, stretching the lead past the 200 mark. On 42, Smith gave India a chance when he stepped out and miscued a lofted hit off Sundar, but Siraj misjudged the catch at long-on and dropped it while off-balance. But soon after he’d moved past fifty, Siraj made up for the miss by getting a ball to leap at Smith from just short of a length. He made an impressive effort to survive the delivery, but couldn’t pull his bottom hand off the handle before the ball had struck his glove, and lobbed to gully.

By the time Thakur sent Green back with an away-seamer in the corridor – it gave Sharma his fifth catch of the match – Australia’s lead had passed 250. Inconsistent bounce was becoming more frequent, with the long, vertical cracks on the pitch now having widened significantly. Natarajan had got one ball to creep through at ankle height and narrowly miss Green’s off stump. Thakur got one to spit up at Tim Paine and hit his glove. Australia may have felt they already had enough for an early declaration, especially given the danger of the erratic bounce injuring one of their bowlers.
But they batted on, perhaps wary of having their bowlers – each of whom has played all four Tests, and all of whom have got through grueling workloads in India’s second innings in Sydney and their first innings here – get back on the field too soon. The runs came quickly, either side of a rain interruption that almost entirely coincided with the tea break, even as Siraj and Thakur chipped steadily away at the wickets. The bowlers survived this period largely unscathed, even though Pat Cummins suffered a smack on his right elbow from Siraj and a glancing blow to the back of his helmet from a Thakur bouncer that kept unexpectedly low.

Eventually, Cummins made an unbeaten 28 – his highest score in 22 Test innings, a lean run stretching all the way to India’s previous tour of the country in 2018-19 – as the last four wickets added 67 to Australia’s total.