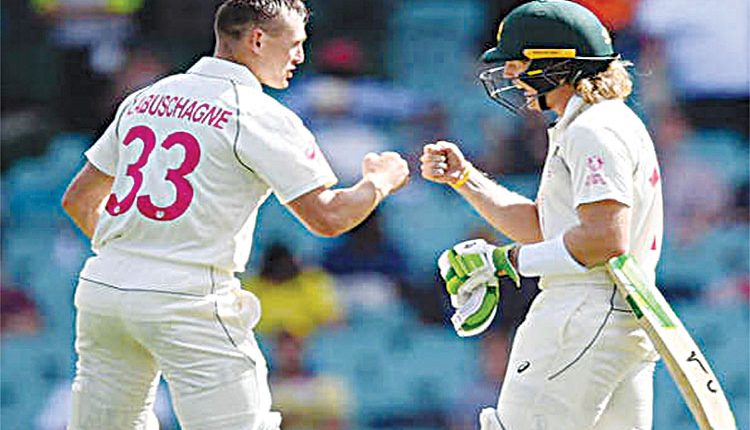 Sydney, Jan 7 (FN Agency) Debutant Will Pucovski and Marnus Labuschagne smacked half-centuries as Australia recovered from an early setback and were 166/2 at stumps on rain-interrupted opening day of the third Test against India, here on Thursday. While Pucovski scored 62 in his impressive maiden Test innings, Labuschagne remained unbeaten on 67 as he and Steve Smith (31) put Australia on top before the close of play. A total of 55 overs were bowled in the day with rain washing out more than three hours of play. Earlier, David Warner returned to playing XI while Pucovski made his debut as Australia won toss and elected to bat at the Sydney Cricket Ground. In the fourth over of the day, Mohammed Siraj gave India an early breakthrough as he dismissed dangerous David Warner, who threw his hands at a wide delivery, after Cheteshwar Pujara completed a catch in the first slip. Marnus Labuschagne joined Pucovski in the middle before the rain halted the proceedings as the teams took an early lunch.

After the play resumed, India exerted pressure and kept the Australian batsmen in check. However, Pucovski got a reprieve off R Ashwin’s bowling as Rishabh Pant could not complete the catch. The Australian debutant had a couple of close calls, including a mix-up. But he managed to hold his nerve and brought up his half-century before Australia went into the Tea break at 93/1, scoring 72 runs in the second session. The pair of Labuschagne and Pucovski completed a hundred-run stand for the second wicket. But Navdeep Saini, making his Test debut, broke the partnership, trapping Pucovski before the wickets for 62. Smith, who walked out to bat after Pucovski’s fall, made his intentions clear, creaming three fours in the first few balls he faced. Labuschagne, meanwhile, continued to graft along and notched up his first Test fifty against India in the longest format of the game. In the 48th over of the rain-curtailed day, the duo of Labuschagne and Smith completed a fifty-run stand and negotiated the remainder seven overs of the day, denying India any more wickets.