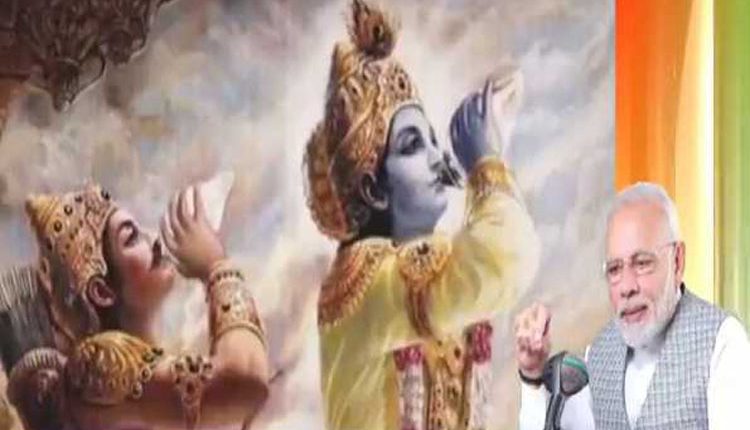 New Delhi, Dec 27 (FN Representative) Prime Minister Narendra Modi on Sunday said that the Bhagavad Gita inspires us in every context of our life. In his Mann Ki Baat programme, he said this holy book has been inspiring us because of the voice of Lord Krishna and the uniqueness of the Gita also lies in the fact that it begins with the quest of knowledge… starts with a question. “ Like the Gita, all the wisdom in our culture starts with inquisitiveness.

The very first mantra of Vedanta is – ‘Athaato Brahm Jigyasa’, that is, come, let us inquire about Brahm and that is why we talk about the inquest of even Brahm, the ultimate creator! Such is the power of inquisitiveness”, he said. Noting that curiosity constantly inspires us to learn something new, PM Modi also said in childhood, we learn only because we were curious and we have been alive as long as there is curiosity in us. As long as there is curiosity, the process of learning something new continues. No age, no circumstance, matters at all in this, he added Referring an example of an 92 year old elderly person T. Srinivasacharya Swami ji from Tamil Nadu, the Prime Minister further said he came to know of such energy of inquisitiveness and even this age and he has been writing his book on the computer, that too, typing himself.

“You must be thinking that writing a book is fine…. but in the times of Srinivasacharyaji, there were no computers so when did he learn the computer?”, he asked and said that it was correct that there was no computer during his college days, but because of his much curiosity in his mind and self-confidence, as it was in his youth days he learnt about computer. “Srinivasacharya Swamiji is a scholar of Sanskrit and Tamil and he has written about 16 spiritual books so far.

However, with the advent of the computer, when he realized that the method of writing and printing books had changed, he learned the computer and necessary software at the age of 86… yes, at the age of eighty-six. Now he is completing his book”, PM Modi added.