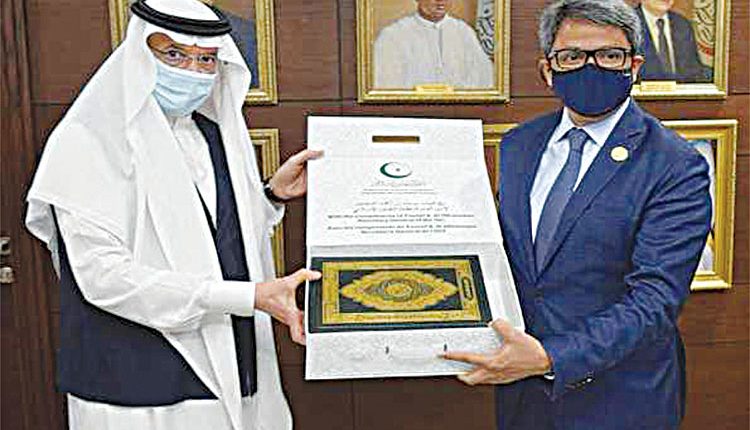 In such projects, Bangladesh could provide its technical know-how and workforce, affluent OIC member states may provide capitals and finance and African countries with reserves of arable land could provide their fertile land area for farming. This would be mutually benefitting for the OIC member states as proposed by Mr. Shahriar. OIC Secretary General Dr.Othaimeen welcomed the proposal and informed he would explore the mechanism under OIC to facilitate such projects. Dr. Othaimeen congratulated Bangladesh on its 50th anniversary of independence. He highly praised the remarkable sustained economic growth of Bangladesh carried out in the last one decade under the able leadership of Prime Minister Sheikh Hasina.

He continued the recent UN decision to graduate Bangladesh from LDC category to the middle-income country is a significant milestone for Bangladesh. He said Bangladesh’s socio-economic success story and leadership on women empowerment could be an example for many OIC member states to follow. Both the dignitaries discussed the Rohingya refugee crisis at length and how OIC could reinforce its engagements for a durable solution to this crisis . The State Minister thanked the Secretary General for sending a high level OIC delegation to Bangladesh in February 2021 to see the condition of the Rohingya refugees.

Mr. Shahriar stressed on political and other supports to continue from the OIC member states until the issue is resolved. Secretary-General Dr. Othaimeen expressed his gratitude to the Bangladesh government for providing shelter to nearly 1.3 million Rohingya refugees and reiterated his commitment to do everything under his purview in resolving the issue. State Minister Shahriar told Bangladesh would like to see OIC as a strengthened and competent organisation to address the issues of Muslim Ummah. State Minister Shahriar praised the OIC’s timely decision to provide COVID vaccines to the OIC LDCs, which is much needed in this dire situation. Earlier, the OIC Secretary General cordially received Bangladesh delegation at his office. Ambassador Dr. Mohammad Javed Patwary, Director General FM Borhan Uddin, Acting Consul General SM Anisul Haque were present at the meeting. State Minister Shariar Alam is in Saudi Arabia on his 3-day official visit and is expected to return to Bangladesh today.