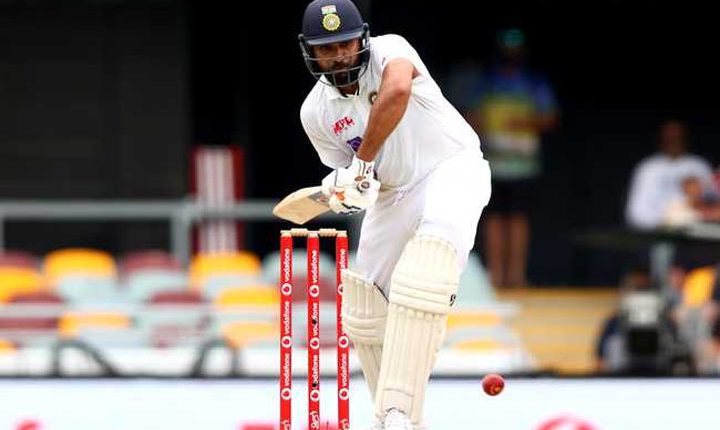 Brisbane, Jan 16 (FN Agency) India were 62/2 at stumps, trailing Australia’s first-innings total of 369 by 307 runs, after rain stopped play on second day of the fourth Test, here on Saturday. Cheteshwar Pujara (8) and Ajinkya Rahane (2) were the not-out batsmen at tea, but play couldn’t restart after the break as torrential rain lashed the Gabba.

Earlier in the morning session, Australia resumed the day at 274/5 with Tim Paine and Cameron Green, on 38 and 28 respectively. The Indian bowlers toiled hard to break the overnight pair of Paine and Green. India’s search for a breakthrough ended only when Paine had got to his fifty. Soon after his milestone, the Australian captain edged one to second slip where Rohit Sharma took another clean catch off the bowling of Shardul Thakur. Once Shardul made that dent, India pounced on the opportunity as debutant Washington Sundar struck from the other end and cleaned up Green for 47. Having seen the back of overnight batsmen, Shardul struck again, trapping Pat Cummins in the front. India picked three wickets for just four runs and looked to restrict the hosts under 350 but Lyon and Starc provided some handy runs.The duo put together a 39-run stand for the ninth wicket with Lyon making 24 and Starc contributing with an unbeaten 35-ball 20. Washington cleaned up Lyon to end the partnership and fellow debutant T Natarajan then dismissed Hazlewood for 11 to end Australia’s innings for 369. Sundar (3/89), Natarajan (3/78), and Shardul Thakur (3/94) picked three wickets each while Siraj took one. Thereafter, Indian openers looked at ease in the second session as Starc and Josh Hazlewood opened the bowling for Australia.

But, it was Pat Cummins who got the breakthrough with just his second delivery, Shubman Gill edging one to second slip where Steve Smith took a sharp catch. On the other hand, Rohit looked in complete control on his way to 44 before he became Lyon’s 397th Test wicket. Playing in his 100th Test, Lyon coaxed a rash shot from Sharma, who advanced down the wicket only to hole out to Starc, who ran in from long-on to take a good catch. After Rohit’s wicket, Cheteshwar Pujara (8) and Ajinkya Rahane (2) added only two runs in the 6.1 overs before the break. As the players left the field for Tea, it started to pour down heavily. Even though it decreased after an hour, a couple of inspections took place which thereby resulted in the play being abandoned on Day 2. Play on the third day will start 30 minutes earlier than previously scheduled to make up for lost time. Brief scores: India 62/2 (Rohit Sharma 44, Pujara 8, Ajinkya 2), trail Australia by 307 runs ( Marnus Labuschagne 108, Tim Paine 50 ; Natarajan 3/78, Shardul 3/94, Washington 3/89)