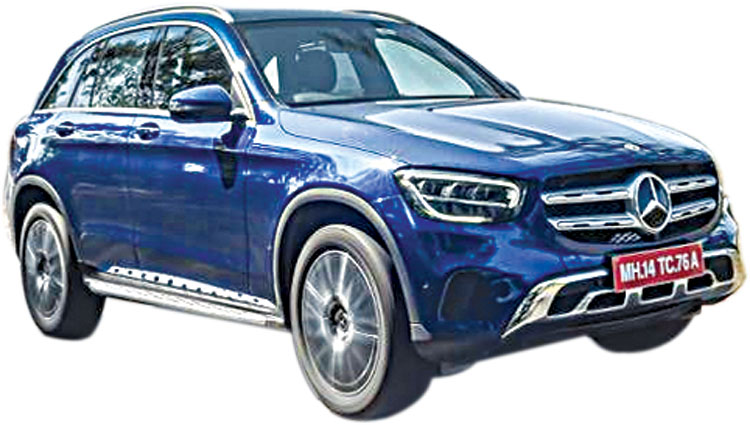 We were up in the mountains recently and you will read all about it next month in OVERDRIVE. But the return journey was quite taxing – a long distance that had to be finished in limited time in a car that doesn’t like tarmac, big traffic jams to contend with around the Delhi protests and new procedures at the airport to follow in the wake of the ongoing pandemic – all of which wore me down by the time I landed in Mumbai. Even a walk to the terminal’s cafÃ© felt like a burden. The kind folks at Mercedes-Benz had agreed to send the test GLC to the airport itself, but now it had started seeming like a bad idea. I would have preferred to be driven home. But like most owners of GLC, it was the front seat that was waiting for me. Sort of a role-play, then.

The cabin
As I stepped into the cabin I saw more CoupÃ© resemblance – a digital instrumentation, with the Sports layout selected. The driver had probably had a fun drive getting to the airport. But Google Maps suggested otherwise, mostly showing red veins of traffic on all the routes around. Sure, the tachometer on the new digital instrumentation can be replaced with Merc’s own satellite navigation readout, which does help in situations like theÂ jammed network that I just encountered outside Delhi that morning. But otherwise, I prefer Google and the GLC’s infotainment screen happily displayed those maps on the crisp and large screen.

This infotainment was updated with last year’s midlife makeover of the GLC and the acclaimed MBUX operating system brought along connected tech, the ‘Hey Mercedes’ digital assistant and some cool functionality too like ‘What Three Words,’ for example. This year, it’s gotten smarter. It can remotely start the car, roll down the windows, open the sunroof or sound the horns for you if you fancy that sort of functionality. If I had the car and its app beforehand, I would use it to pre-cool the cabin because the dark upholstery does get warm and retains heat. If you have an Amazon Echo or Google Home device, the Alexa or Google assistants can now use them to activate similar functions in the car or retrieve certain info like its fuel status, cabin temperature, service status or even its location.

The GLC comes with a nifty 360-degree camera now, along with fully digital instrumentation and a smarter MBUX system
This also happened to be the first time I drove a GLC petrol that isn’t a coupe or one that makes announcements of my arrival with crackles and pops. My previous stints with this practical crossover have been diesel-powered. Thanks to better NVH insulation, the 2.0l petrol in the GLC 200 feels more refined than its counterpart in the C-Class, and though it is marginally lower on the output than the sedan, the heavier crossover accelerates almost as quickly with a 0-100kmph sprint time of 7.8s (8.1s tested) – only 0.1s slower the C 200.

The engine only gets vocal past the 5,000rpm mark and under that, the GLC almost feels like a typical, whispering luxury car. The nine-speed transmission shifts smoothly too and does an excellent job at ambling in the city or cruising on the highway.

Verdict
The GLC is easily one of the best offerings in the mid-size luxury crossover space. Be it the kind of commute I took home after my trip, or the fun rounds around the mountain roads that it rejuvenated me for the next morning, the GLC does it all quite nicely. It is a well-rounded package in that sense and that shows in the way it performs month on month on the sales charts. But instead of resting on its laurels, the GLC has gone ahead and made improvements to its strong value proposition. Of course, those improvements come at a premium of around Rs 1.5 to 2 lakh over last year’s model, but Mercedes-Benz has still managed to keep the 2021 GLC more accessible than the competition, which means it still remains the best buy.