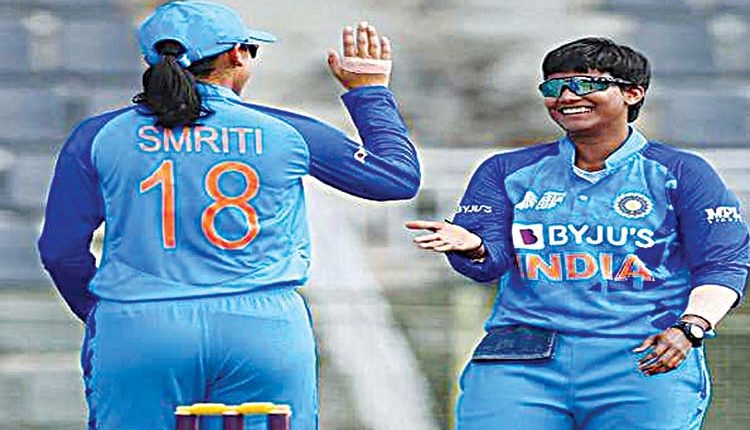 Sylhet (Bangladesh), Oct 10 (Agency) India registered a nine-wicket win over Thailand in the Women’s T20 Asia Cup in the last league stage match here at Sylhet International Cricket Stadium on Monday. The spin trio of Deepti Sharma, Sneh Rana and Rajeshwari Gayakwad shared seven wickets between them as Thailand were restricted to 37, their third-lowest total in the Asia Cup, which India then chased down in six overs for the lose of one wicket. Batting first, Thailand started off cautiously, moving to just 16 for 1 at the end of the powerplay. The collapse began with Naruemol Chaiwai’s run-out in the seventh over.
Thailand openers Nannapat Koncharoenkai and Natthakan Chantham started off watchfully as Deepti conceded just one run off the first over. Koncharoenkai broke the pressure with a boundary off Meghna Singh. In the following over Chantham did the same and got a boundary against Deepti.But a couple of balls later, Chantham was deceived by the turn and was bowled. A dot ball pressure continued to pile up as Thailand could only score 16 runs in the powerplay. Thailand lost their last eight wickets for just 17 runs. Rana dismissed Chanida Sutthiruang for a duck. Sharma’s direct hit at the non-striker’s end ended Koncharoenkai’s stay for 12.

Rana and Rajeshwari Gayakwad shared five wickets between them to skittle Thailand even more. Nattaya Boochatham found S Meghana at mid-off while trying to smash the low full-toss, and Thailand were bowled out for 37 runs in the 16th over. Rana was the pick of the bowlers with a three-wicket haul as Deepti and Rajeshwari Gayakwad shared four wickets among themselves. In reply, opener Shafali Verma’s poor form continues as she departed for just 8 runs. Then Pooja Vastrakar and Meghana together scored 18 runs off the final over of the powerplay to take India over the line. India, who already sealed a semifinal berth, topped the points table with 10 points from six group-stage matches.