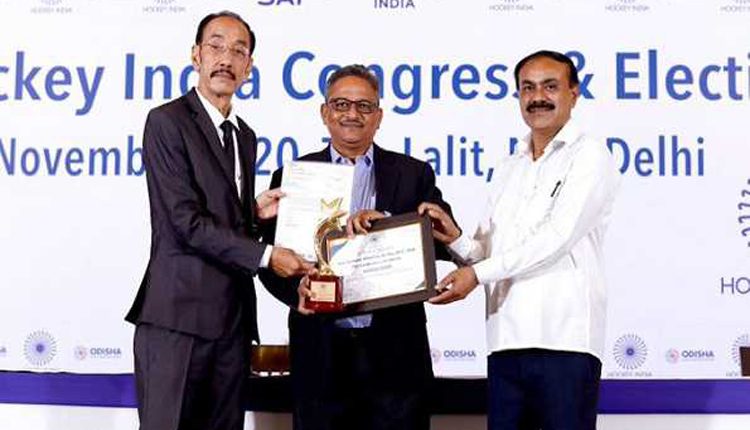 Nagpur, Nov 23 (Bureau) Manish Gour from Nagpur, who was recently awarded the Hockey India best technical official 2019-2020, has said that he is pleased to see young officials and former players from state and national level showing keen interest in officiating. “I began officiating as an umpire in 1992 and moved on from umpiring to technical officiating in 2012. It has been a long journey, but over the course of long term development in the past years, what has been most satisfying is to see the number of youngsters with or without a hockey background showing interest in hockey officiating,’ said Gour, who was overwhelmed with the recognition he received from Hockey India for his efforts as a technical official.

‘I believe this is largely due to the efforts taken by Hockey India. They have made umpiring and technical officiating opportunities & courses available consistently across the country and this also gave me an opportunity to develop myself as an FIH Certified Educator for Technical Officials,” he added. With nearly three decades of experience under his belt, Gour who works as a Deputy Station Manager with Central Railways, has been actively involved in educating and preparing young officials for a bigger stage. “Over the past years we have been consistently making complete use of technology to educate and mentally prepare Umpires and Technical Officials to handle various situations that may arise in a match. I feel due to these efforts, Indian officials are very well-equipped to handle the most challenging situations on field. Hockey has evolved over the years and I am very happy to see that with the help of Hockey India, we are able to keep up with changing times,” said Gour. Manish has been tournament director at Hockey India 5-a-side National Championships since its inaugural edition in Pune back in 2017. He further emphasized that Hockey India with regular domestic events is not only ensuring good exposure for budding players but also for umpires and technical officials. “Five-a-side hockey is something new for all of us. By ensuring annual five-a-side tournaments, Hockey India is ensuring officials get the right exposure too. Due to this exposure some of our officials were able to officiate in International five-a-side tournaments,” he said.