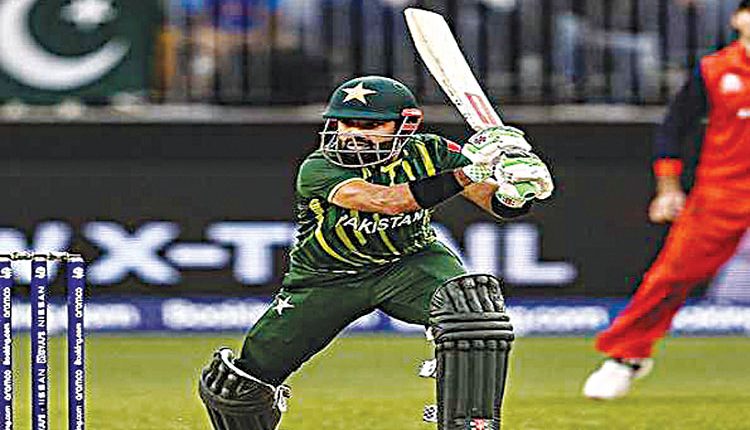 Perth, Oct 30 (Agency) Pakistan showcased a brilliant bowling performance to restrict Netherlands to a low score in their crucial Group 2 encounter and seal a six-wicket win here on Sunday, their first victory in the T20 World Cup. Pakistan made full use of the pace and bounce on offer on a quick Perth wicket. Netherlands never got going against the varied Pakistan bowling attack, managing to score only 19 runs in the Powerplay. Shadab Khan then did all the damage in the middle overs, ending his spell with superb figures of 3/22 in his four overs. The pace quartet of Shaheen Afridi, Haris Rauf, Mohammad Wasim and Naseem Shah were also superb, with Netherlands finding it hard to counter them. Colin Ackermann (27 off 27) was the only Netherlands batter who got his eye in and played a couple of cheeky shots. Mohammad Waseem would produce a sizzling 19th over, bowling two superb yorkers to further dent Netherlands’ efforts to add a few valuable runs.

In the end, Netherlands could only post a total of 91/9 on the board in their 20 overs, as it was a job well done with the ball for Pakistan. Chasing the total down, Mohammad Rizwan set the tone early with a superb shot down the ground. It wasn’t such good luck for his partner and skipper Babar Azam, as he was run out for four. It is the first time in his T20I career that Babar has been dismissed three times in a row for a score of under 10. A partnership would then develop between Rizwan and Fakhar Zaman. The pair established a stand of 37 off 31 deliveries which helped Pakistan motor along in their small chase. Fakhar’s knock of 20 come to an end against the bowling Brandon Glover, with Scott Edwards taking a terrific diving catch behind the stumps. Rizwan continue to guide Pakistan towards the target but missed out on his half-century by a mere one run, with Paul van Meekeren getting his prized scalp. While Pakistan went on to lose another wicket with the scores level, they completed the win with enough overs in the bank. It was Pakistan’s first win in this tournament, and notably their first ever win in Australia in T20Is.