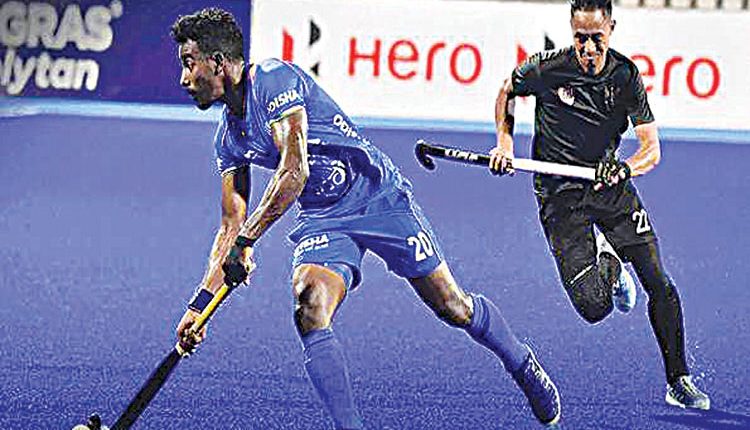 Jakarta, May 26 (Agency) Needing a 15 goals margin win to qualify for Super 4s, new-look India achieved an impossible task by routing hosts Indonesia 16-0 in Asia Cup at the state-of-the-art GBK Sports Arena here on Thursday. With this unbelievable victory, India shunted out Pakistan who were placed second with four points in the Pool A table. India put up a dominant show as they penetrated into the circle 43 times with an unbelievable 80 percent possession. Six goals were scored in the first two quarters before India came out all guns blazing in the final two quarters. India were -3 in terms of goal difference before entering this game. If India would have not got to the 15-goal margin win, Pakistan would have qualified for the knockouts.

Dispan Tirkey and Abharan Sudev were cynosures as the former smoked five goals and the later scripted an unblemished hat-trick as they turned the natch on its heading taking India to 6-0 lead in the first half. After India smashed their 10th goal through Sudev, Tirkey smashed his second to extend India’s lead to 11-0 two minutes later. Tirkey sounded the goalpost for his hat-trick on a penalty corner before Sudev notched another goal in the 54th minute. He eventually scored the deciding goal for India before shattering Pakistan’s hopes to qualify with a 16th goal a minute later. India faced an uphill task of getting 15 goals margin due to their own doing. They drew with Pakistan 1-1 in the tournament opener before Japan thwacked them 2-5, denting their chances of qualifying for Super 4s. Today a glimmer of hope came India’s way after Japan defeated Pakistan 3-2, needing them to win the last league match but with a huge margin of 15 goals. “It’s disappointing that we need to wait for India’s match to learn about our fate of making the Super 4s,” expressed an evidently disappointed Pakistan Skipper Umar Bhutta.

However, he credited his team’s resilience and said, “The boys really gave all their heart. We really wanted to make it to the Super 4s but the two goals that were disallowed really hurt our chances and we also ended up getting many cards that didn’t help our chances,” Bhutta added. While it was Japan who made a positive start to their match with two back-to-back goals in the 14th and 15th minute through Ryoma Ooka and Ikumi Saeki, Pakistan shook off the early nerves to score in the 23rd minute to reduce the lead to 1-2. One such effort even worked when Pakistani striker Junaid Manzoor scored a goal in the 40th minute, but unfortunately for them, the goal was disallowed as there were 12 players on the pitch at the time of goal. This event resulted in the Pakistani Captain getting a yellow card that forced him to sit out of the match for the next ten minutes. Pakistan’s misery didn’t end there, with time ticking away, their Captain Bhutta equalized the score in the final quarter but the goal was disallowed on the basis a technical foul after Japan took a video referral. This really dented Pakistan’s hopes of a win, even though they tried to score till the dying minutes of the match, the Japanese goalkeeper Yoshikawa Takashi was sublime in his efforts to defend the scoreline for Japan and clinch a winner.