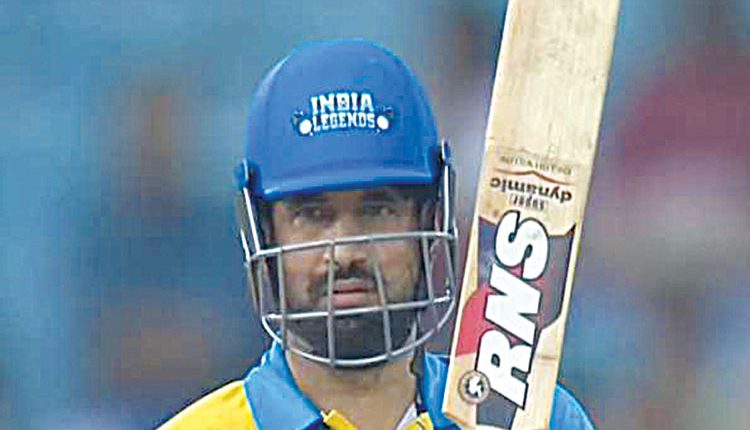 New Delhi, Sep 29 (FN Representative) India Legends defeated Australia Legends by five wickets in the first semi-final and stormed into the final of the Road Safety World Series 2022 on Thursday here at Shaheed Veer Narayan Singh International Cricket Stadium. In a match that was completed on day two as the game was shifted to the next day due to rain, Naman Ojha and Irfan Pathan played sensational knocks to guide their team to a memorable win in 19.2 overs. Pathan smashed an unbeaten 37 off 12 balls while Ojha remained not for 90 off 62 balls. Ojha smashed five sixes while Irfan hit four maximums as the duo shared a stand of 50 off just 22 balls. Chasing a target of 172 runs in 120 balls, India Legends were off to a cautious start as Naman Ojha opened the innings with Sachin Tendulkar. The duo shared a stand of 38 runs for the first wicket.

The fans were eagerly waiting for a match-up between Tendulkar and Brett Lee but the Master Blaster’s innings came to a premature end in the powerplay. Tendulkar attempted a paddle scoop off Nathan Reardon, leaving his leg-stumps exposed and missed the ball completely to get clean bowled for 10 off 11 balls. Jason Krejza gave India the second jolt in his first over when he got Suresh Raina caught at long-off for 11. India’s scorecard read 54/2 in 8 overs. Yuvraj Singh joined Ojha in the middle and the duo steadied the ship for India. Ojha made use of the occasion completed his fifty off 35 balls and hammered Dirk Nannes for back-to-back sixes in that over.

His union of 61 runs for the third wicket with Yuvraj brought the hosts in control but the Indians lost three wickets in quick succession. Yuvraj (18 off 15), Stuart Binny (2 off 6) and Yusuf Pathan (1) were dismissed cheaply and the Indians found themselves on the back foot as the equation came down to 36 off 18 balls. The 18th over bowled by Reardon gave away 12 runs and India needed 24 off 12 balls. Irfan then smashed Nannes for a hat-trick of sixes and 21 runs were scored in that over. With three required from the final over, Irfan smashed a boundary on the second ball of the final over and finished the game for his team. Earlier, batting first Australia Legends posted a competitive 171 for the loss of five wickets in the match that was completed on Thursday after rain prevented any resumption of play after the 17th over of Australia’s innings. Before the rain interruption, the Shane Watson-led side had posted 136 for the loss of five wickets after being put in to bat first. Cameron Green (6* off 6) and Brad Haddin (1* off 2), who were present in the middle when the play was stopped, resumed batting for Australia on the next day and the duo smashed 35 runs in the next three overs.

White remained unbeaten on 38 off 18 balls while Haddin added 11 runs to his total. On Wednesday, Indian bowlers made a comeback in the middle overs and picked up wickets at regular intervals after Australia Legends were off to a brisk start in the powerplay. Captain Shane Watson and his opening partner Alex Doolan hit some lusty blows inside the first six overs and made good use of the fielding restrictions on a batting-friendly surface. The Aussies were cruising towards a big total as the openers shared the partnership of 60 runs in 7 overs. Leg-spinner Rahul Sharma provided India Legends with the much-needed breakthrough by ending Watson’s knock for 30. Raina – who was at his electric best in the field – took Watson’s catch. Later, Yusuf Pathan struck twice in the over and sent Doolan (35 off 31 balls) and Callum Ferguson (10 off 8 balls) and put a brake on the run flow. Later in the evening, Raina took a stunning catch diving towards his left at the point region to end dangerous Ben Dunk’s knock for 46. Dunk’s innings of 26 balls was laced with five fours and two sixes before getting dismissed by Abhimanyu Mithun. He had also picked up the wicket of Nathan Reardon in the same over.