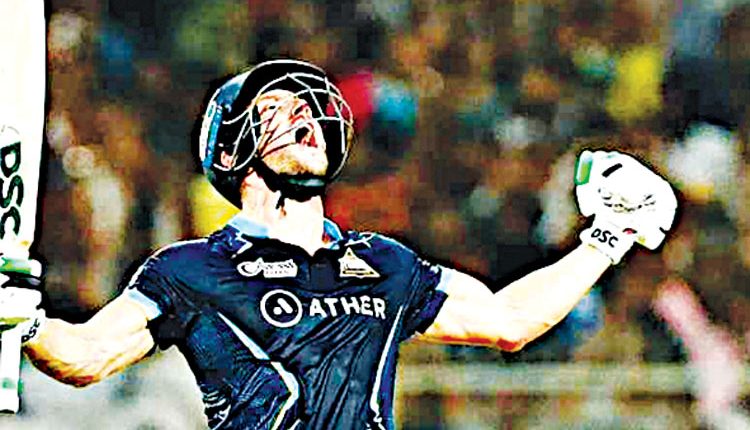 Kolkata, May 24 (FN Agency) Hardik Pandya and David Miller scripted an unfinished 106-run partnership to propel Gujarat Titans into the Tata IPL final with a thrilling seven-wicket win over Rajasthan Royals in the qualifier 1 at the Eden Gardens here on Tuesday. Up against a challenging 188/5 posted by the Royals, GT reached 191 for the loss of three wickets with three balls to spare before a crowd of nearly 50,000. Needing 16 runs in the last six balls, left-handed willower David Miller hit three successive sixes off pacer Pranandish Krishna to finish off the match with a bang. Miller remained not out at 68 of 38 balls, his knock adorned with five sixes and three boundaries. Hardik was unconquered with 40 of 27 balls.

Titans received a jolt early in their innings when Wriddhiman Saha returned empty-handed as he nicked aTrent Boult delivery to wicketkeeper Sanju Samson. Shubman Gill and Mathew Wade then began the chase in tandem before Gill was run out following a visible misunderstanding for the second run after a 72-run partnership between the two. Gill, who was batting confidently fell short of the crease after scoing 35 in 21 balls with five boundaries and a lofty six. Mathew Wade (35 off 30 balls) played some good shots before giving a lofty catch to Jos Buttler while trying to pull Obed McCoy to the midwicket boundary. Earlier, Jos Buttler (89; 56 balls) anchored Rajasthan Royals to a challenging 188/5, setting GT an asking rate of 9.45 runs for victory. After some early fireworks from skipper Sanju Samson (47 from 26 balls) the English opener almost single-handedly took RR to a competent total before a large crowd at the iconic Eden Gardens.

Thirty-one-year-old Buttler was run out of the last ball of the innings while going for a second run. . Sent to bat on the green surface, RR received an early blow ( 1-11) when opener Yashavi Jaiswal was out cheaply (3) in Yash Dayal’s opening over, as he nicked the pacer behind the wicket. In-form Samson consolidated the innings with a 68-run stand with Buttler. Samson launched a blistering assault, hitting three towering sixes and striking five boundaries before Alzarri Joseph held him at long-off. The bowler was spinner Sai Kishore.. Devdutt Padikkal, who walked in next, also exhibited some lusty hitting (28: 20 balls), adorned with two sices, before being bowled by GT skipper Hardik Pandya. Shimron Hetmyer also was out cheaply at 4 as he lofted Mohammed Shami and Rahul Tewatia accepted the offering.