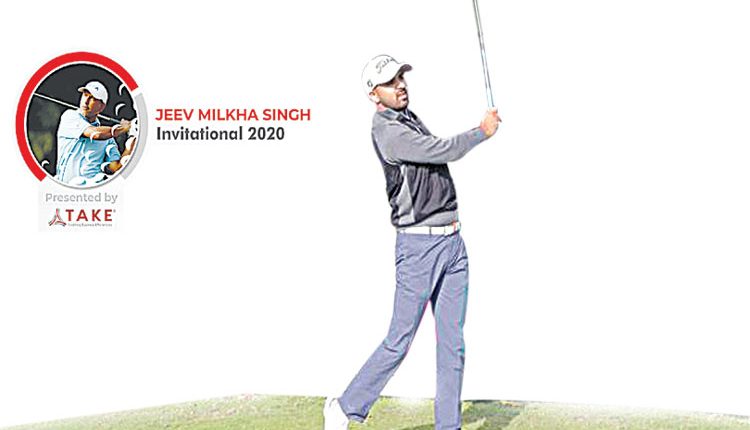 Chandigarh, Dec 04 (Bureau) Bengaluru’s Khalin Joshi braved an injured wrist and some inconsistent putting to put up the first round’s best score of six-under-66 at the Jeev Milkha Singh Invitational 2020 Presented by TAKE Sports. The 28-year-old Khalin, a winner of four titles including one on the Asian Tour, had an eventful day as he sank two eagles, five birdies and three bogeys en route his 66 to take a one-shot lead at the Rs. 1.5 crore event being held at the Chandigarh Golf Club. Local lad Akshay Sharma occupied tied second place at five-under-67 along with another Bengalurean M Dharma.

Among the prominent names, Anirban Lahiri (70) was tied 10th, SSP Chawrasia (71) was tied 16th, Gaganjeet Bhullar (72) was tied 33rd, Jyoti Randhawa (74) was tied 53rd while tournament host Jeev Milkha Singh (75) was placed tied 68th. Khalin Joshi, who started from the 10th tee on Thursday, made a 20-feet eagle conversion on the 13th, two birdies and two three-putt bogeys to make the turn at two-under. Joshi then had a far better front-nine. He garnered his second eagle of the day by hitting an excellent drive and following it up with a 10-feet conversion on the second hole. He collected three more birdies on the front-nine thanks to some good gap wedge shots. Khalin also dropped his third three-putt bogey of the day on the seventh. Joshi suffered a wrist injury on Monday while in Bengaluru and thought about withdrawing from the tournament. But after a couple of sessions with the physio at the CGA on Tuesday and Wednesday he felt much better and decided to play the event. Khalin, currently ranked 10th on the PGTI merit list thanks to three top-10s in the season, said, “I was thinking about withdrawing from the tournament but the good work by Nav, the physio at CGA, helped my wrist feel much better. “My hitting including my driving and approach shots stood out today. However, my putting was patchy as I made some good conversions but also had three three-putts which all resulted in bogeys. “Importantly, I replaced the three-iron in my bag with a gap wedge for this week as I felt the latter would suit me more for the yardages at this course. The addition of the gap wedge seems to have helped me as it set up a couple of birdies for me today.
“When I played the two events in the Chandigarh Tricity in November I felt my basics were off and my ball position was not great. I was not very comfortable on the course then even though those two events helped getting me back in the competitive groove. Thereafter, I went back and worked on some of my basics including my ball position.” Akshay Sharma, the winner in Panchkula last month, endured a poor start as he dropped a bogey on his opening 10th hole. Sharma then rallied with birdie-eagle on the 12th and 13th where he sank 20 and 10 feet putts respectively. Akshay impressed with long conversions through the day. He went on to drain birdie putts from a range of 20 to 35 feet on the 17th, third and eighth. Akshay, currently fourth on the PGTI Order of Merit, said, “I didn’t have a great start but the eagle on the 13th really lifted my confidence. It was windy and I struggled with my hitting making only 12 greens in regulation. I sank a lot of long putts today but missed as many as three short putts within five feet. “I’m feeling the momentum since my win last month. Playing on my home course adds to my confidence so I’m looking forward to another good week,” added Sharma, who followed up his win in Panchkula in early November with a third place finish in Chandigarh the following week. M Dharma, a two-time winner on the PGTI, turned it on with six birdies after a bogey on his opening hole. Gurugram’s Veer Ahlawat and Noida-based Amardeep Malik were joint fourth with scores of 68. Bengaluru’s Chikkarangappa, the 2018 champion, was tied for sixth at 69 along with the Chandigarh duo of Angad Cheema and Shabeg Singh Kooner and Faridabad’s Abhinav Lohan.