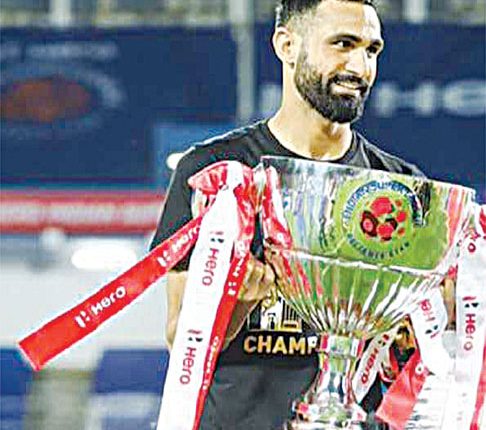 Mumbai, May 31 (Agency) India goalkeeper Amrinder Singh on Monday joined ATK Mohun Bagan after leaving reigning Indian Super League champions Mumbai City FC. The 27-year-old, who is currently in Doha as part of the national team for the upcoming World Cup qualifying round matches, has signed a five year contract with the Kolkata club.

The footballer from Mahilpur, Punjab played for ATK in 2015-16 season and featured in 13 matches. He returns to the city for his second stint under the Spanish head coach Antonio Lopez Habas. “Even though I played in Kolkata before, it was for a very short time. This joining, of course, is going to be a new chapter in my football career,” said Amrinder. “Winning all the trophies for Mumbai last year was a memorable event in my life. I want the same success in the Green-Maroon jersey next season,’ he added.

Earlier in the day, Mumbai City FC confirmed the departure of Amrinder after an association of five seasons. He joined the club on September 7, 2016 initially on loan from Bengaluru FC, made his debut against FC Goa later in the year in November. The goalkeeper, who has also captained the franchise, had penned a three-year extension with the club in March 2018. Amrinder made 84 appearances for Mumbai City FC with the last match being the 2020-21 ISL final against ATK Mohun Bagan.

Explaining why he joined ATK Mohun Bagan, Amrinder said, “I played for a while in ISL-2 under the coaching of Habas. Everyone knows about his success in ISL. Habas’ football philosophy always draws me. The biggest thing is that he brought out the best game from the Indian footballers. It’s great to be a member of this team.’ “The support of a huge number of ATK MB supporters, the football philosophy of the principal owner of the team and the glorious history of football of this city (Kolkata) are the reasons,’ he added.