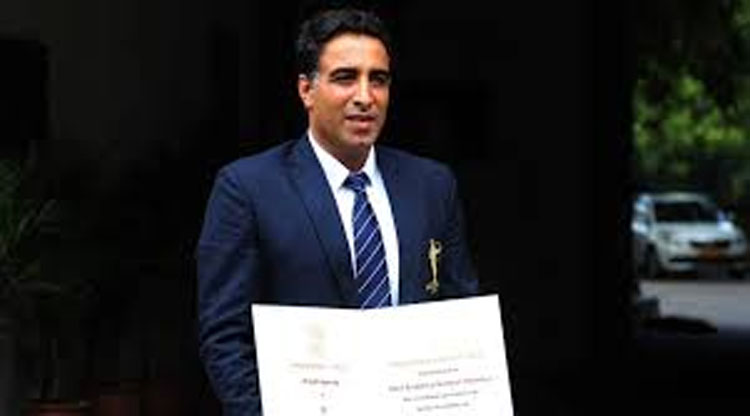 Jammu, Dec 3 (Agency) First Dronacharya Awardee from the Union Territory of Jammu and Kashmir, Kuldeep Handoo has been appointed Prime Minister Narendra Modi’s ‘Fit India’ Ambassador. Mr Handoo, who is Wushu Coach of Team India is serving as Inspector in Jammu and Kashmir Police Department. The ace player and coach, Mr Handoo has added another feather in his cap after he was appointed Ambassador of ‘Fit India’.

A letter in this regard has been issued by Ekta Vishnoi, Mission Director of ‘Fit India’ of Sports Authority of India (SAI), located at Jawaharlal Nehru Stadium Complex in New Delhi. It has been told that in the year 2019, the ‘Fit India Movement’ was started by the Prime Minister, Narendra Modi. Its purpose is to make every section of the country health conscious. This initiative received unique support across the country and people of all ages participated enthusiastically. Since Mr Handoo is a well-known name in the field of sports. This is the reason that he has been made the ambassador of ‘Fit India’ this time so that he can inspire every section of the society to stay fit. Mr Handoo however, have expressed happiness and said that it is a matter of great pride for him. “Till date the Prime Minister of any country has not given any credentials to stay fit and we are all fortunate that we have Mr Narendra Modi as our Prime Minister, who wants to see every section and age of society healthy,” said the Coach. “If every citizen of the country is healthy, then only India will be able to progress,” he said and explained his routine to stay fit. President Ram Nath Kovind at the online ceremony of National Sports and Courage Awards 2020 by the Ministry of Youth, Programs and Sports, Government of India on August 29, on the birthday of Major Dhyanchand, who is known as the hockey legend, Mr Handoo, who is Chief Coach of the Indian Wushu Team, received the Dronacharya Award.