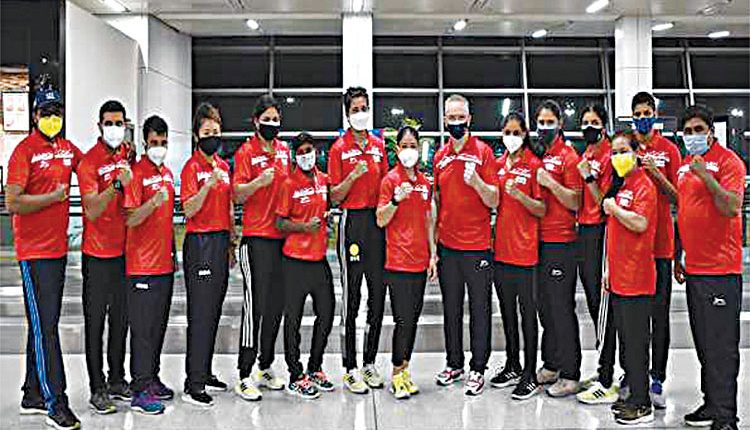 New Delhi, May 23 (FN Bureau) Spearheaded by the six-time world champion Mary Kom and defending champion Amit Panghal, Indian contingent on Saturday reached Dubai for the 2021 ASBC Asian Boxing Championships, which is jointly hosted by BFI and UAE Boxing Federation. Under a special circumstance, as part of being the official delegation for the prestigious Championships, the 31 member Indian contingent comprising 19 players and members of support staff flew on a special bio bubble SpiceJet aircraft from Delhi.

Notably, UAE has barred all travellers from India – except UAE nationals, diplomatic passport holders and official delegation letter holders – due to the second wave of the COVID-19 pandemic that has hit the country. ‘Indian contingent has landed in Dubai and reached the hotel. Two rounds of RT-PCR test have been conducted–one at the airport and the other at the hotel. Indian team flew on SpiceJet flight under the air bubble agreement with all necessary and relevant permissions,’ the Boxing Federation of India (BFI) said in a statement.

The BFI also thanked the Indian ambassador to the UAE for his assistance. ‘The Boxing Federation of India is grateful to Indian Embassy and Ambassador Mr Pavan Kapoor for obtaining the necessary permissions from the Ministry of Foreign Affairs an Internal cooperation, Government of UAE and ensuring the contingent’s participation at the 2021 ASBC Asian Championships. BFI is also thankful to UAE Government and Asian Boxing Confederation (ASBC) for their help and support,’ it said. The seven Indian Olympic-bound pugilists, including Amit Panghal (52kg), Vikas Krishan (69kg), Ashish Kumar (75kg), MC Mary Kom (51kg), Simranjeet Kaur (60kg), Lovlina Borgohain (69kg) and Pooja Rani (75kg) alongside the other Indian boxers will be seen competing at the Championships which is set to witness a high-voltage action in presence of top Asian and Olympic qualified boxers from all the major Asian boxing powerhouses.

Boxer Vinod Tanwar (49kg), who was initially named as part of the 20-member squad for the Championships, has been withdrawn after he was tested positive. Tanwar was not part of the camp at the time he was tested positive. ‘Vinod Tanwar was in his hometown and was advised for RT-PCR test. However, with the reports coming positive, Tanwar was advised to be in isolation at his hometown and the team management decided not to add any replacement in the 49kg category,’ the spokesperson said. In the last edition of the Championships held in Bangkok in 2019, Indian team returned with an unprecedented 13 medals including two gold. The matches at the 2021 Asian Championships are scheduled to commence from Mary 24 and will go on till June 1.

Lubricants to play a greater role as emission norms tighten