Women are only safe under BJP’s rule: Smriti 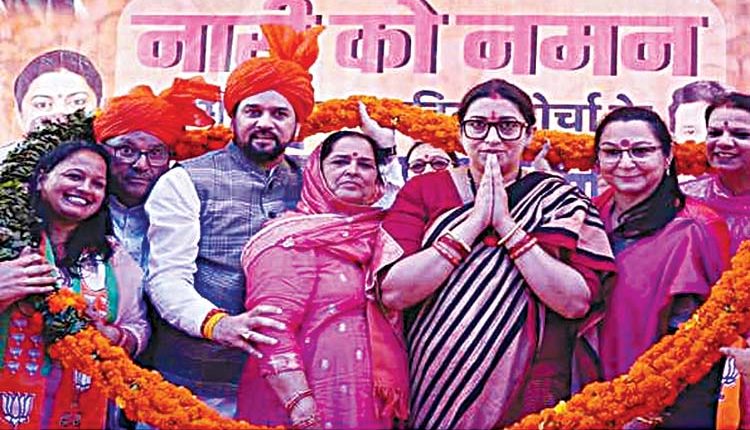 Hamirpur (HP), Oct 10 (Representative) Union Women and Child Development Minister Smriti Irani on Monday gave a clarion call to women in Himachal Pradesh to rally behind the BJP in the upcoming Vidhan Sabha polls to ensure “crushing” defeat to the Congress and others who harm their cause. She said “women are only safe under the BJP’s rule”.Irani called women backbone of society while addressing a massive women “sammelan” ‘Nari ko naman (Salute to women)’ at Bijheri kaswa of Hamirpur district.Union Information-cum-Broadcasting Minister, Anurag Thakur and district BJP chief, Baldev Sharma, were also present at the rally.Irani said women have played a major role in elections all over India and this time too they were “playing the same game and helping the BJP to return to power in the state”. Irani claimed it is the BJP government that gave them reservation in all the Panchayati Raj and urban body institutions.

“And women were performing well there by occupying high posts of Chairpersons and Vice chairpersons of Zila Parishad, Block Samitis and gram panchayats,” she added. The central minister said the double-engine government in Himachal has given new dimension to the state’s development and the Modi government at the Centre and the Jairam Thakur government have done a great job together to give a boost to the overall progress of the state. While the Congress only makes people dream as is their tradition, Irani said, adding it was the Thakur government that has given benefits to all sections in the state. She hailed Prime Minister Narendra Modi for giving a new vision to national politics and taking care of and giving respect to the women of the nation. She hit out at the Congress saying that “the party always ditched people and time is teaching them a lesson”.

Speaking on the occasion, Anurag Thakur said the BJP has done a lot for the welfare and well being of the people, especially the women, youth and the farmers. He called upon the women folk to come forward and expose the evil designs of the Congress for trying to divide the nation on communal lines. Thakur said the people in his home state knew the working style and lifestyle of the Congress people and would not fall prey to their nefarious designs and help the BJP to form its government in Himachal Pradesh for the second time in a row thereby changing the age-old custom that no party could win two successive elections in the state. Sharma said the BJP is the party of the masses and the women were its lifeline. He exhorted the women to help the BJP in the upcoming elections. Earlier, a grand reception was accorded to Smriti Irani and Anurag Thakur as they reached the Bijhari kaswa with women showered petals and raising slogans.