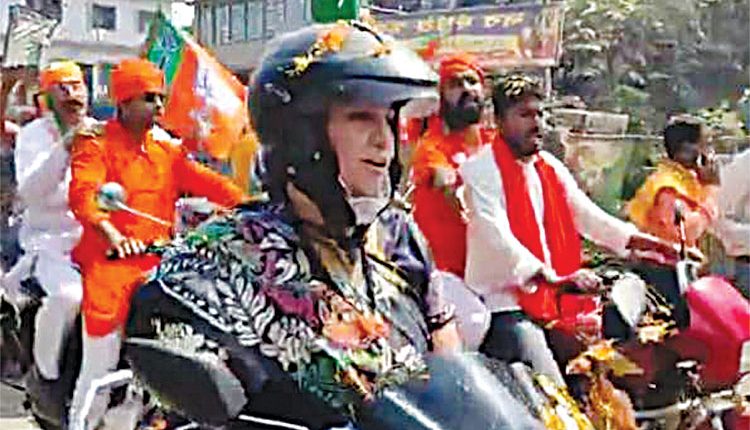 Kolkata, Feb 26 (Agency) Union minister Smriti Irani on Friday led BJP’s “Poriborton Yatra” riding a battery-powered scooty in the city, a day after West Bengal chief minister rode pillion on a similar two-wheeler from her home to Nabanna to protest hike in diesel and petrol prices. Union minister for women and child development Smriti Irani led the rally from Garia station in south Kolkata to woo voters and said the BJP wanted a real change of government to ensure “Sabka Saath Sabka Vikas” in West Bengal.

Many BJP state women wing leaders, including Agnimitra Paul and Rajya Sabha member Roopa Ganguly accompanied the minister in the road show where hundreds and thousands of saffron brigade supporters followed their leaders. BJP’s rally began from Garia station to end at Bhangor via Kheyada in South 24 Parganas and after that the rally would proceed towards Dum Dum in northern part of the city in the North 24 Parganas. On Thursday, chief minister Mamata Banerjee rode pillion on a scooty as her cabinet colleague Firhad Hakim drove the two-wheeler to the state secretariat from her residence in Kalighat. She, however, rode back to home on the scooty by herself. Ms Banerjee was protesting the rise in petrol and diesel.

Foreigner arrested with 815 grams of heroin from Gurdaspur