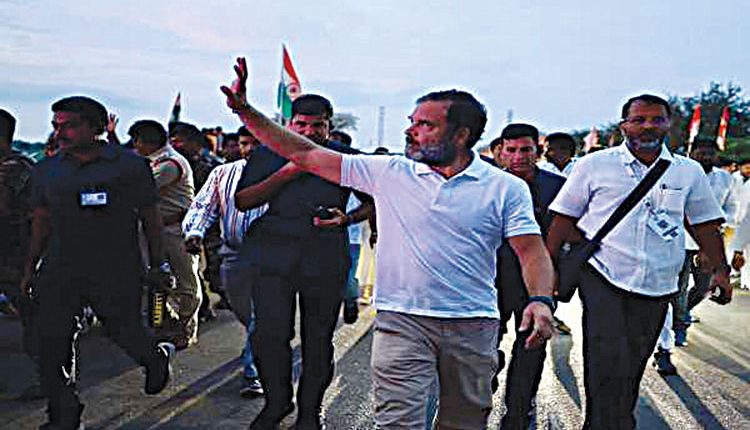 Kurnool, Oct 19 (Agency) Congress party leader and Wayanad MP Rahul Gandhi, who is leading the Bharat Jodo Yatra from Kanyakumari to Kashmir, resumed his padayatra at Chagi village in this district on the second day on Wednesday. Flanked by thousands of party activists and leaders, braving the rain, Rahul Gandhi continued his Yatra.He halted his yatra at Arts and Science College in Adoni town and would resume the same at 1600 hours. Leaders of various organisations were meeting Rahul Gandhi at the College, AICC member Kolanukonda Shivaji told UNI, adding that braving rain, a large number of people welcomed the Bharat Jodo Yatra at various places.

After covering 25 kms today, the Yatra would conclude at Banavasi village near Yemmiganur town.A spell of heavy rain in the area failed to deter the enthusiasm of Congress activists to accompany the former Congress President, Shivaji said. The police imposed restrictions around Chagi village and the police did not allow activists to go towards the Art College. The Congress activists were seen arguing with the police at various places.