Our focus is on dev, not vote-bank politics: PM 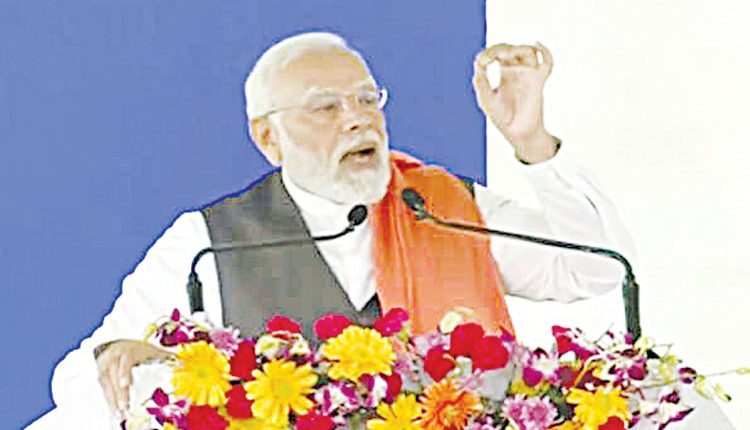 Yadgir, Jan 19 (Agency) Highlighting the priorities of his government at the Centre, Prime Minister Narendra Modi on Thursday said its focus is solely on development and not vote-bank politics.”Even if one district in the country lags behind on the parameters of development, the country cannot become developed,” he said after inaugurating a slew of projects.

Giving the example of Yadgir in North Karnataka, PM Modi lamented the backwardness that prevailed in the region in the path of development.Even though the region had the capability, Modi observed that the past governments had absolved themselves just by declaring Yadgir and other such districts as backward.He recalled the time when the ruling governments of the past indulged in vote-bank politics and did not pay heed to basic infrastructure like electricity, roadways and water.He noted that it was the present government that addressed the most backward regions on priority and initiated the hundred aspirational villages campaign including Yadgir.The PM noted the emphasis on good governance and development in these regions and informed that Yadgir has vaccinated 100 percent of children, the number of malnourished children has gone down significantly.”Be it education, health or connectivity, Yadgir has been among the top 10 performers of the aspirational districts programme,” he remarked.

PM Modi reminded that the coming 25 years are ‘Amrit Kaal’ for the country and for every state.”We have to create Viksit Bharat during this Amrit Kaal. This can happen only when every person, family and state gets associated with this campaign. India can be developed when the life of the farmer in the field and the entrepreneur is improved. India can be developed when there is good crop, and factory output also expands,” he said.This will need learning from the negative experiences and bad policies of the past, he said.PM Modi underlined the importance of water security for the development of 21st-century India which stands at par with border, coastal and internal security.He informed that out of the 99 irrigation schemes that were lying pending in 2014, 50 have already been completed and schemes have been expanded.In Karnataka also many such projects are underway, he said. “Narayanpur Left Bank Canal – Extension Renovation and Modernisation Project (NLBC – ERM) with a canal carrying capacity of 10,000 cusecs can irrigate 4.5 lakh hectares of command area,” he informed.PM Modi also talked about the unprecedented focus on micro-irrigation and ‘per drop more crop’ as more than 70 lakh hectares of land have been brought into the ambit of micro-irrigation in the last 7-8 years.

“Today’s project will benefit 5 lakh hectares of land in Karnataka and work is going on to raise the water table,” he stated.He praised local farmers for making Yadgir a pulse bowl and helping the country in reducing foreign dependence in this area and informed that 80 times more pulses were procured under MSP in the last 8 years.”Pulse farmers have got 60,000 crore rupees in the last 8 years compared to a few hundred crore rupees before 2014,” PM said.PM Modi was in Yadgir to inaugurate a slew of projects including the foundation stone laying of Yadgir multi-village drinking water supply scheme under the Jal Jeevan Mission at Kodekal.A Water Treatment Plant of 117 mld will be built under the scheme.The project, which costs more than Rs 2050 crore, will provide potable water to about 2.3 lakh households of more than 700 rural habitations and three towns in the Yadgir district.During the programme, PM Modi also inaugurated the Narayanpur Left Bank Canal – Extension Renovation and Modernisation Project (NLBC – ERM).The project with a canal carrying capacity of 10,000 cusecs can irrigate 4.5 lakh hectares of command area and will benefit more than three lakh farmers in 560 villages of Kalaburgi, Yadgir and Vijaypur districts.The total cost of the project is about Rs 4700 crores. He also laid the foundation stone of the 65.5 km section of NH-150C. This 6-lane Greenfield road project is part of the Surat – Chennai Expressway. It is being built at the cost of about Rs 2000 crore.