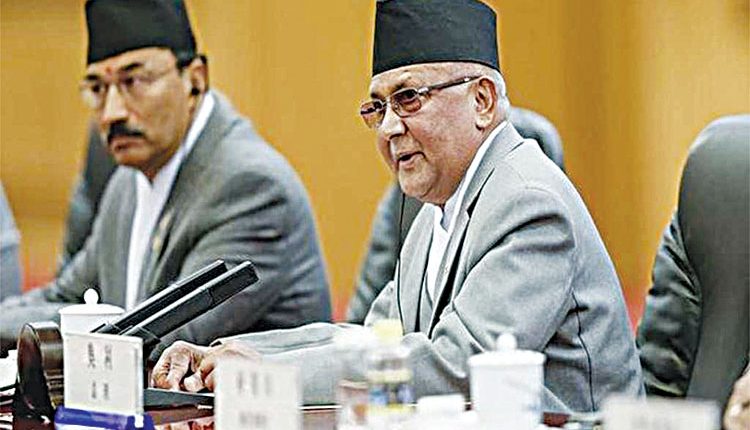 Kathmandu, Dec 20 (UNI) In fast changing political developments in Nepal, the Himalayan country’s Parliament was dissolved on Sunday by President Bidya Devi Bhandari following a recommendation by Prime Minister K P Sharma Oli earlier in the morning. “Nepal President ratifies the proposal of Parliament dissolution presented by Prime Minister K P Sharma Oli,” the President’s Office said. The President also announced fresh elections to be held in two rounds on April 30 and May 10 next year. The 275-member House of Representatives, which is the lower house of Parliament, was elected in 2017.

The President approved the recommendation of the Council of Ministers, stepping on Article 76 (1) and (7) and Article 85 of the constitution. Earlier in the morning Prime Minister Oli held an emergency meeting of his Cabinet before recommending dissolution of the House. The sudden development is set spark off a political crisis in the Himalayan country since many opposition leaders have decided to challenge the Prime Minister’s decision in court. It has given rise a heated political debate in the country and threatens to snowball since Nepal’s constitution does not have a provision for the dissolution of the House. Consequently, all opposition parties strongly criticized the move describing it as ‘’authoritarian.’’ Prime Minister Oli was under pressure to withdraw an ordinance issued on December 15 to amend the Constitutional Council Act (Functions, Duties and Procedures), 2010, and had got it endorsed by the President the same day. The ordinance which states that a majority of the Council members can hold the meeting, follows postponement of a meeting of the Constitutional Council on December 15 because of Speaker Agni Sapkota’s refusal to attend.

The House Speaker is one of the members in the Constitutional Council, headed by the Prime Minister, which makes recommendations for key appointments including in constitutional bodies, judiciary and foreign missions. As soon as the Cabinet meeting began on Sunday morning, Prime Minister Oli announced that he was going to recommend the House dissolution to the President. The Prime Minister had on Saturday held meetings with the President, his fellow party Chair Pushpa Kamal Dahal and Secretariat member Ram Bahadur Thapa. Nepal’s main opposition party Nepali Congress (NC) strongly criticized the Prime Minister’s decision describing it as ‘’authoritarian’’ and said the NC would resist it politically. It urged people to act together to protect the constitution and the democratic system. NC leader Ram Chandra Paudel said the Prime Minister’s decision to dissolve the Parliament is against the constitution, against the democratic system and the country itself. He had said Nepal’s constitution does not have such a provision and the President should not approve the recommendation. ”The Parliament dissolution recommendation should be rescinded…I denounce this non-democratic act of pushing the country and democracy to instability and crisis,” Paudel said. Former Prime Minister and chairperson of the Janata Samajwadi Party’s Federal Council Baburam Bhattarai urged all democratic forces to unite against Prime Minister’s KP Sharma Oli’s move to dissolve the House of Representatives.

“PM Oli’s move to recommend house dissolution is against the spirit of democracy, is anti-constitution. Prime Minister’s irresponsible action is harmful for democracy,” Bhattarai stated in a video shared on his social networking profiles. Co-chairperson of ruling Nepal Communist Party (NCP) Pushpa Kamal Dahal made last ditch efforts and held meetings with the Prime Minister at his official residence in Baluwatar twice. He had also held consultations with top leaders of the party at his Khumaltar residence.