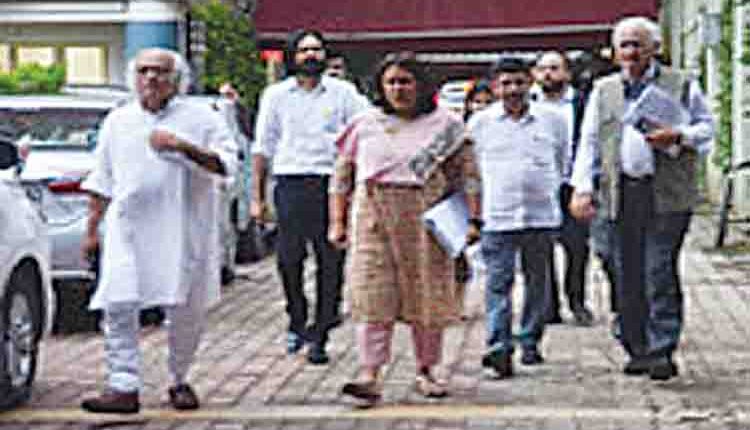 New Delhi, Oct 11 (Representative) A delegation of Congress leaders on Monday told the Election Commission that no violation of the Representation of the People Act was done during the Bharat Jodo Yatra, and the NCPCR complaint of children being used for electioneering is baseless. A delegation of Congress leaders including general secretary Jairam Ramesh, spokesperson Supriya Shrinate and senior leader Salman Khurshid met Election Commission officials to reply to a notice by the poll watchdog over a complaint by the National Commission for Protection of Child Rights (NCPCR). The Congress leaders also filed a complaint against BJP functionaries alleging they were using children in a “malafide” and “perverse” way. “We met the election commission on a lot of frivolous complaint filed by the NCPCR which is meant to protect children’s rights.

Instead they are electioneering, and making all sorts of bogus allegations,” Shrinate said. “We have filed a counter complaint against BJP and it’s functionaries on how they are using children in a malafide way and a rather perverse order,” she said. Ramesh said the ECI was informed that no violation of the Representation of People’s Act or any Model Code of Conduct was done. “We told the ECI that in the Bharat Jodo Yatra,neither the representation of people’s act has been violated, nor any model code of conduct has been violated. So we fail to understand why did the ECI send us a notice. We gave a detailed document how the NCPCR has filed childish complaint that children are being used,” said Ramesh. “Rahul Gandhi ji went for prize distribution in a painting competition for 15 minutes, and it is being said children are being used for election,” he said. The Congress leader said the NCPCR, a body created during the UPA regime for ensuring protection of rights of Children, is now being headed by “BJP, RSS functionaries “.

“Thousands of people are coming everyday, children are coming with their parents, their families, everyone wants to click a selfie with Rahul ji. There is nothing illegal about that,” he said. “There is no election campaign happening. Rahul Gandhi ji is not telling children to vote for Congress… NCPCR was formed during UPA regine for ensuring child rights. Now for the first time it is being headed by workers of BJP, RSS,” he said.Khurshid said they told the ECI that other agencies should not give their work to the poll panel, and it is not good for the functioning of the commission. He also said that ECI is meant to watch over elections and there is no context of any poll in this case. The NCPCR headed by Priyank Kanoongo had asked the ECI to carry out an inquiry and initiate necessary action against the Congress and Rahul Gandhi for allowing children to take part in its Bharat Jodo Yatra.

Must help each other during crisis: PM to global community